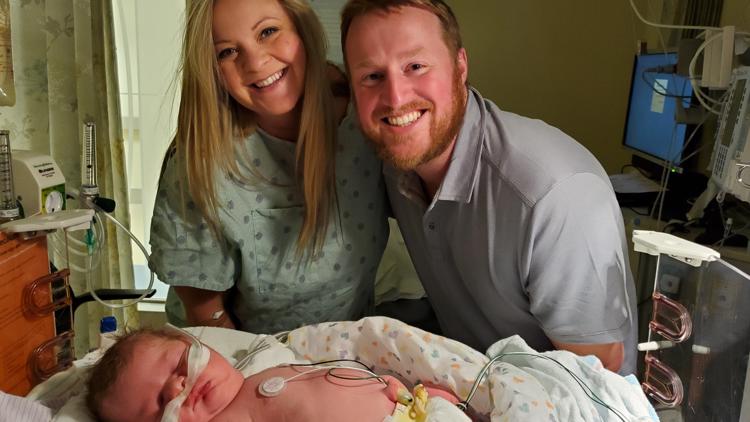 Michelle Johnson and Jeff Maginnis got word at her 20-week ultrasound that her developing baby was diagnosed with spina bifida.

DAMASCUS, Ore. — An Oregon baby became the second person in the world to undergo a ground breaking surgery after he was diagnosed with spina bifida while still in the womb.

Tobi Maginnis, now 8 months old, was born happy and healthy thanks to the procedure by a team of doctors at the University of California, Davis.

At home in Damascus, Tobi Maginnis is all smiles and laughs.

“Even when we were in [the] NICU, he smiled and he would laugh in his sleep as a baby. Three days old, laughing in his sleep,” said Michelle Johnson and Jeff Maginnis, Tobi’s parents.

That joy extends to their entire family after a long journey to get to this point.

“Jeff and I met — and I have a 13-year-old son and Jeff has a 6-year-old daughter — and we decided we needed one more to complete our family,” Johnson said.

But after Johnson’s 20-week ultrasound last year, the couple learned some distressing news during a call with the radiologist.

“His voice was just trembling,” Johnson said. “He says, ‘I need to talk to you about your ultrasound.’ And I knew something was wrong. He said ‘There’s some abnormalities. It appears to be spina bifida.'”

OTHER STORIES: Portland orthopedic surgeon one of the first in region to do new ACL procedure

According to health experts, spina bifida occurs when spinal tissue fails to fuse properly during the early stages of pregnancy, leading to a range of lifelong cognitive, mobility, urinary and bowel disabilities. It affects 1,500 to 2,000 children in the U.S. each year.

“Just kind of shock,” Maginnis said about learning of the diagnosis. “There’s this very serious problem with your fetus, with your baby. What do you do? How do you react? How do you move forward?”

Because options in Oregon for fetal surgery were extremely limited, the couple had to look outside the state. This led them to UC Davis and a clinical trial that makes use of stem cells to treat spina bifida. The clinical trial, known formally as the “CuRe Trial: Cellular Therapy for In Utero Repair of Myelomeningocele,” is funded by the state’s stem cell agency, California Institute for Regenerative Medicine.

“I tell [Jeff] all the time, I would rather be in the CuRe trial than win the Powerball because of how rare and exclusive it is, and how life-changing it’s been for our son.”

After several screenings, interviews and acceptance into the trial, the couple moved down to California. She was the second patient to enroll in the trial.

“I think I was nervous, but I was also relieved knowing we’re pursuing the best option for our baby,” Johnson said.

Despite fears and concerns, with the help of a 40 person team, the surgery was a success. At 25 weeks gestation, Johnson had the landmark fetal surgery and stem cell procedure, where stem cells were placed directly on her fetus’s spinal cord using a special patch to repair the spina bifida defect, according to UC Davis.

The couple spent the rest of the pregnancy in California, with a C-section scheduled at 36 weeks.

“They put the drape down and they held Tobi up. It was like Simba in the The Lion King. A Pride Rock moment,” Johnson said. “And then Jeff said, ‘It’s a boy!’ And that’s how we found out Tobi was a boy.”

Born February 1, 2022, Tobi is happy, healthy and full of personality.

“Tobi is the second baby in the entire world to receive stem cells during gestational surgery for spina bifida repair,” Johnson said.

She praised the staff at UC Davis for their work and called them “talented.”

“After 10 years of animal trials, to finally be able to do this on humans, this is exciting and I just hope it continues to become more available for all moms,” Johnson said.

At this point, Tobi doesn’t need any more procedures, but doctors will monitor his progress for several more years so the team can continue to assess the stem cell surgical procedure’s safety and effectiveness.