One dead in fire at former motel in Northeast Portland 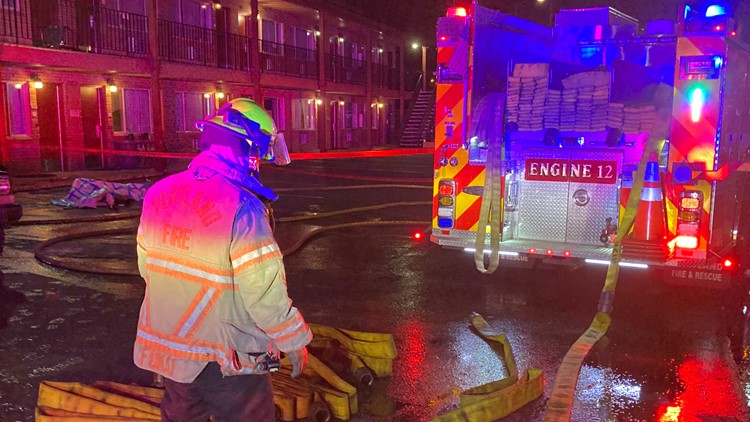 The former Rodeway Inn operates as a transitional housing facility run by Do Good Multnomah. No residents will be displaced, fire officials said.

PORTLAND, Ore. — Firefighters found one person dead after extinguishing a fire at the former Rodeway Inn on the corner of Northeast Sandy and Lombard. The building is now a residential facility for homeless people transitioning into permanent housing operated by Do Good Multnomah.

Fire crews were dispatched to the site just before 5 a.m. Tuesday morning, according to a news release from Portland Fire & Rescue. The arriving firefighters saw smoke and flames in one of the ground floor apartment units.

The crew from the first engine on scene focused on fighting the fire and making sure adjacent rooms were evacuated. The crew from the second engine looked for a fire hydrant hookup but found that the closest hydrant was multiple blocks away, requiring the use of all of the truck’s hoses.

The crews extinguished the fire “within minutes” of being dispatched. The interior crew found and removed a body from the room, and the person was later confirmed to be a fatality.

PF&R did not immediately release the identity of the fire victim, but said it is in the process of notifying their next of kin.

The cause of the fire is still under investigation, but the fire department said that an initial assessment did not suggest any criminal intent.

The building’s concrete structure kept the fire contained to the single room where it originated, PF&R said, so no residents will be displaced as a result of the fire.

Do Good Multnomah is a service provider for Multnomah County and the City of Portland’s joint office of homeless services.

The organization’s motel shelters originated as isolated living spaces for houseless residents at high risk from COVID-19, according to its website, but they will now continue to function as shelters in the long term.

The motels focus on serving vulnerable populations such as people over 65 or with pre-existing conditions, offering individual living spaces for residents transitioning into permanent housing.