One-day strike at about 100 Starbucks stores, including three in Portland 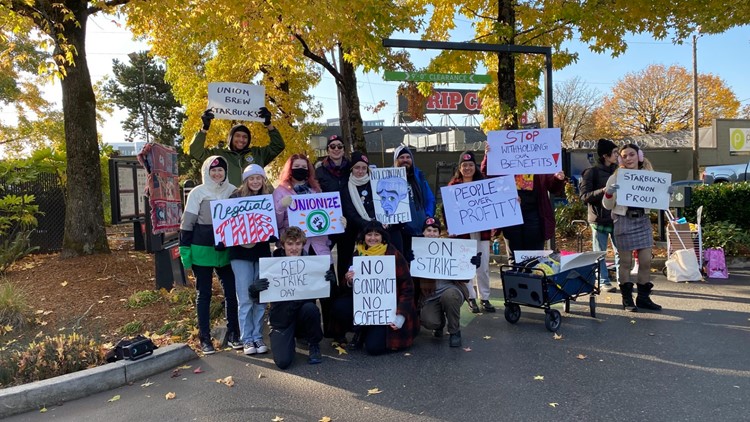 Workers at three Portland locations and seven in Eugene joined what the union referred to as the Red Cup Rebellion, a reference to the company’s Red Cup Day.

The three participating Portland locations were the downtown store at Southwest 5th & Oak, the Convention Center store at Northeast Grand and Lloyd and the Westmoreland store at Southeast Milwaukee and Bybee, according to a map on the national union’s website.

Seven stores in Eugene were also listed among the participants. More than 100 stores participated nationwide, according to a news release from the union.

SBWU Portland members participated in #RedCupRebellion today, joining over 1,000 SBWU members across the country. We stand in solidarity with our siblings in Eugene, across the PNW, and the country. We remain committed to Arthur’s reinstatement and Shelby Runyon’s firing. pic.twitter.com/nqJRgSbn9n

Starbucks typically gives out free reusable red cups to customers who order holiday or fall-themed beverages on Red Cup Day, but the union said its workers planned to picket and hand out red Starbucks Workers United union cups instead.

In addition to general concerns about working conditions, the strike was described in the news release as a protest against what the union alleges are union-busting tactics employed by the coffee chain.

Starbucks, which opposes the unionization effort, said it is aware of the walkouts and respects its employees’ right to lawfully protest. The Seattle company noted that the protests are happening at a small number of its 9,000 company-run U.S. locations.

At least 257 Starbucks stores have voted to unionize since late last year, according to the National Labor Relations Board. Fifty-seven stores have held votes where workers opted not to unionize.

The first four Portland Starbucks locations voted to unionize in May, about a month after the first store in Eugene voted to unionize. Other stores in both cities followed suit in subsequent months.