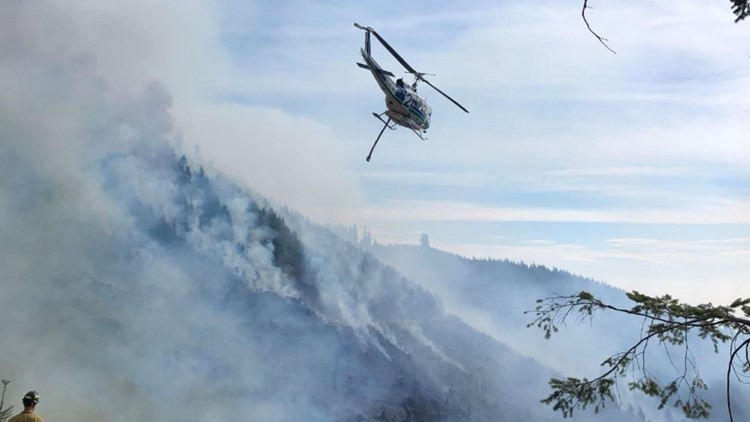 Washington state officials said the fire burning near Larch Mountain must be human-caused since there was no lightning when it broke out Sunday.

WASHOUGAL, Wash. — The Nakia Creek Fire burning near Larch Mountain is believed to have been ‘human caused’, but Washington state officials are still trying to determine exactly how the flames sparked.

On Tuesday, the Washington State Department of Natural Resources said there was no lightning when the fire broke out on Sunday evening in Clark County, leading them to the ruling.

The fire has so far burned 250 acres in remote, rocky and steep terrain. Fire officials have issued Level 1 (BE READY) and Level 2 (GET SET) evacuation notices to around 110 homes near the fire.

Stephanie Warren, who owns a farm and day care in Camas a mile away from the Level 1 evacuation orders, told KGW she’s watching the flames closely and has a plan in place for her family and animals in case it’s needed.

“I have a giant African tortoise in the basement, we have many pigs, I’ve got donkeys, so several of our friends who are in the Vancouver area are already staged and ready to come pick up some of the smaller animals,” she said.

Fire crews are worried about unseasonably warm and dry weather. The Portland area has seen a record number of 80-degree days already this month and more are coming this week with no rain in the forecast.

Still no rain on the horizon, even as the nights have cooled. We’ll see occasional smoke or haze from the fire on Larch Mtn, WA over the next couple of days. #kgwweather pic.twitter.com/2Nrovbo73l

Nearly 100 firefighters are working to put out the flames and several helicopters are attacking it from the air. Fire crews said they have it 10% contained.