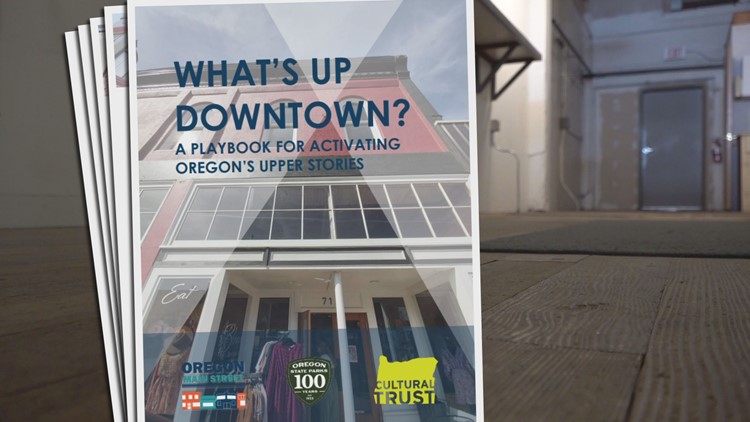 Researchers found that around 50% of upper floors in historic buildings downtown aren’t being used. The state wants to fix that by showing communities how to do it.

LEBANON, Oregon — Downtown areas across Oregon have been working to revitalize their main streets, even before the pandemic’s challenges.

As communities restore storefronts and work to attract new business, a new study found there’s a big opportunity to breathe new life into downtown regions by making use of the often unused upper floors of buildings.

In places where some might just see an old building, others see possibility.

That’s certainly the case on Main Street in Lebanon, where the Downtown Association and Oregon Heritage showed KGW a couple second stories that are currently unused.

“We started discovering that there are a lot of great buildings in communities that are underused, so they might be completely empty or they might have just the first floor occupied, but the upper floors are not being used,” said Kuri Gill with Oregon Heritage. “Then we also realized that these communities have a lot of needs, like housing, office space, community gathering space, and thought to ourselves, ‘Well, maybe there’s a solution here.'”

Gill said Oregon Heritage partnered with researchers from the University of Oregon to examine 33 main street communities. Lebanon was one of the main cities involved in the study. The team worked to find out just how much second-story space is available and why it isn’t being used.

“Two of the primary reasons were that they hadn’t been used for a long time, so to put them into use, something needs to be done to them a little bit. Or, they need to change their use,” Gill said. “They might have been designed for office space, but they need housing space, so you need to do a little work to make them viable for housing.”

The survey revealed nearly 50% of upper floors on these main streets are unused and nearly 20% of those don’t need serious renovations. Many of the buildings are historic.

The report also highlights the ways communities can access grant money and other funding to transform those second stories.

“It was a huge growing and learning experience for us as we learned some new spaces downtown that we weren’t even aware of,” said Cassie Cruze, with the Lebanon Downtown Association. “You just need the imagination and the fortitude to go forward, but really, it can be beautiful.”