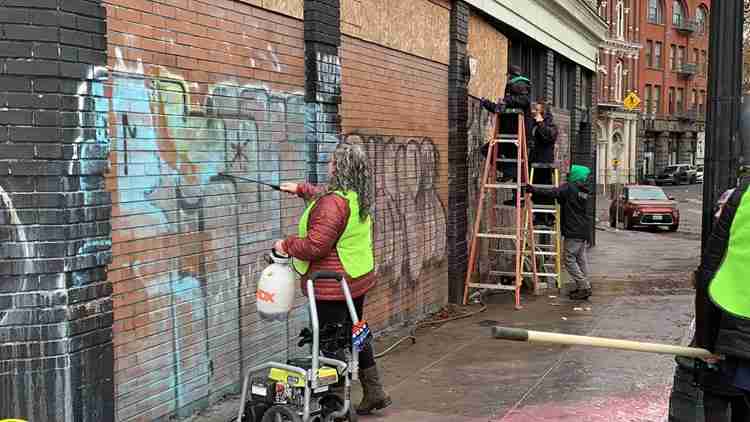 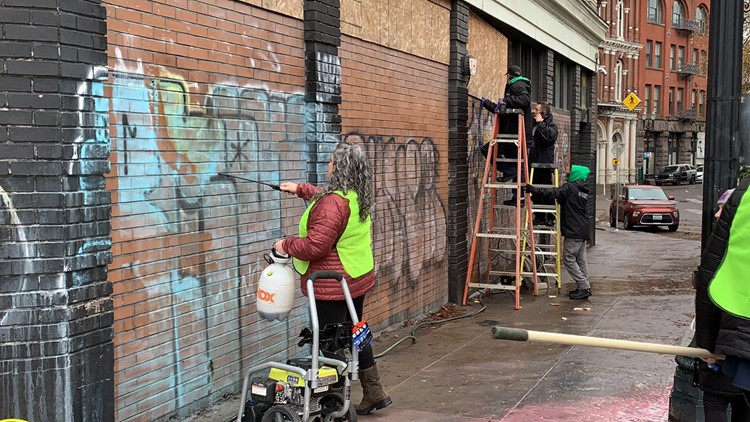 PORTLAND, Ore. — The Salvation Army, Downtown Portland Clean & Safe and Central City Concern launched a new program that aims to clean up graffiti and trash in neglected areas in downtown Portland — One Block At a Time.

On Friday the organizations kicked off the program in the area around the Salvation Army Female Emergency Shelter on West Burnside Street and Southwest 2nd Avenue. Volunteers spent the morning scrubbing graffiti and picking up trash in the area.

Director of Operations for Portland Clean and Safe Steve Wytcherley said getting the area cleaned up is crucial.

“We’re just covering this block, two or three blocks around here and there’s an area behind this building that has a lot of trash accumulation in it, we are just going to try to get as much of it as we can,” said Wytcherley.

The graffiti is a huge eyesore for the Salvation Army building that serves up to 300 meals each day. Executive Director Justin Moshkowski said it could take two days to get the graffiti completely off the building.

“The graffiti is a challenge, it sort of gives the impression that it’s closed and it’s an abandoned building, when that’s not the case,” Moshkowski said.

Organizers said the goal is to continue the cleanups but there’s no set date for the next one. Some employees at Dan and Louis Oyster Bar across the street were skeptical about how long the cleanliness would last.

“By the end of the day, give it twenty-four hours, it’s going to look the same way again because nobody wants to step up and main this process,” Robert Swanson said.