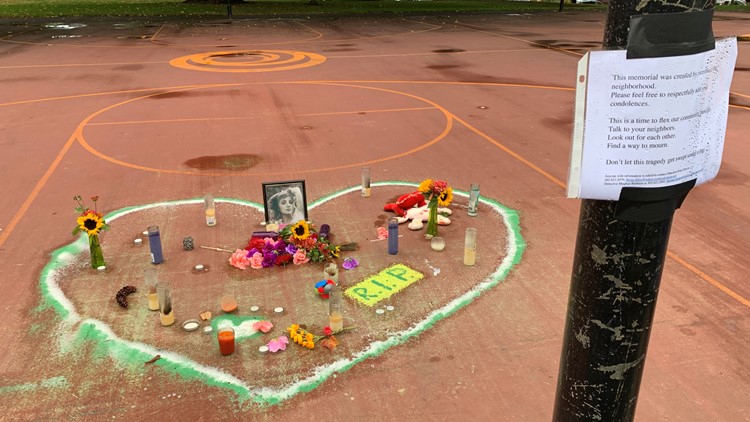 Police identified the victim as 26-year-old Erika Evans. Neighbors of Wallace Park remember her with a memorial.

PORTLAND, Ore. — A basketball court at Northwest Portland’s Wallace Park has been turned into a memorial honoring Erika Evans. The 26-year-old was killed there on Friday, Sept. 23.

Tracy has lived in the neighborhood for about two years. Initially, she referred to the area as the little gem of Portland, but not so much anymore.

“I notice a lot more people here at night,” Tracy said. “Over in that little zone I’ve seen people sleeping.”

Whether or not that played a role, Evans’ death remains a mystery.

Police responded to reports of a shooting at Wallace Park around 11:15 p.m. on Friday. Upon arrival they found Evans suffering from a gunshot wound. Evans, who has apparent ties to Texas, died before paramedics could transport her to the hospital.

Unfortunately, Evans’ loved ones are not the only ones feeling the weight of gun violence in Portland.

Since the start of the year there have been more than 960 shootings in Portland. Approximately 60 of those have been deadly.

Among them is the shooting death of Martese Oliver early Sunday morning outside a motel near Northeast 82nd Street and Northeast Sandy Boulevard. The U.S. Marshals arrested Martre Tirik Oliver, 26, for shooting and killing his twin brother.

There have been no arrests in the killing of Erika Evans, the young woman who neighbors of Wallace Park remember with a memorial.

“How sad that someone that young came across whatever bad circumstance in this nice neighborhood,” Tracy said.

Tracy is hoping police catch the killer sooner rather than later.

“I don’t want to be worrying all the time but I’m definitely aware now.”

Anyone with information about the case is urged to contact the Portland Police Bureau.