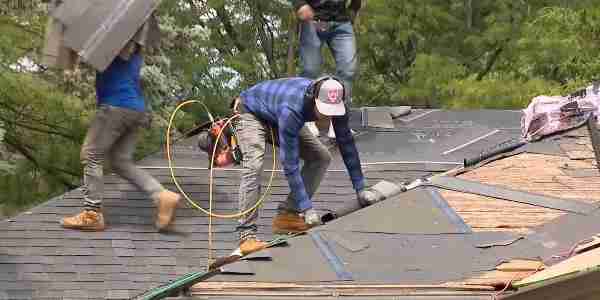 Ruth Foster-Lindsay, who has served in the Navy, was gifted a free new roof through a national veteran-focused program.

Navy veteran, Ruth Foster-Lindsay, had a 20-year-old roof that was in serious need of replacement. Shingles had been beginning to fall off the roof and the wood underneath was rotting. She didn’t know what to do. Her budget didn’t allow for a $35,000 new roof, but this was an absolute necessity.

In desperation, she applied for a program to receive a new roof through Habitat for Humanity. As she anxiously waited, her roof was worsening in condition. The tarp she was using as a temporary patch blew off the roof in a storm. Thankfully, she did eventually receive a roof replacement.

“I’m really excited. I didn’t get much sleep last night. I’ve been nervous the whole month,” said Ruth as she enthusiastically watched the crew install her new roof.

Owens Corning partnered with Habitat for Humanity to make this roof installation possible. Ruth’s roof is one of 360 new roofs that Owens Corning has donated through the Owens Corning Roof Deployment Project. They have been honoring veterans in this way since 2016.

“We do this about four to five times a year or as much as we possibly can. It feels great. Anytime we can give back to the community, it’s a small win for us,” an Owens Corning representative said.

Premier Roofing and Renovations is the contractor Owens Corning partnered with for this particular installation. The roofers were thrilled to be giving back in their own way.

“To be honest, this crew wants to do it for nothing. They donate their time. When I [say] this is a team effort, it’s not a joke,” said Keith Powers of Premier Roofing.

Serving for our country takes great courage. This should not go unrecognized. Owens Corning sees that and has made it their mission to acknowledge this for every veteran they donate to.

Do you know of someone in the industry who is ‘doing good deeds’ in their community? Help us catch them at it. Send news and information to info@rooferscoffeeshop.com.

Alec is a reporter for RoofersCoffeeShop, MetalCoffeeShop and AskARoofer. When he isn’t investigating the state of the roofing industry, you might find him playing drums with his bands in Denver.