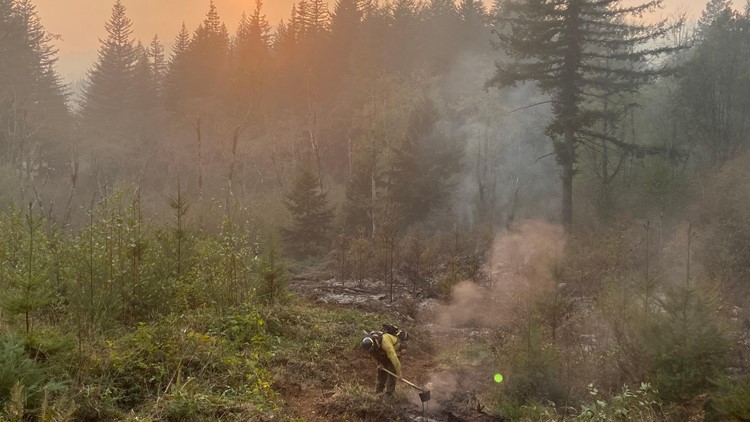 The fire is now 23% contained and with all evacuation levels lifted, people previously in Level 3 evacuation zones can start returning to their homes.

CLARK COUNTY, Wash. — All evacuation levels have been lifted for the Nakia Creek Fire, burning near Camas in Clark County, which means people whose homes were previously in Level 3 (Go Now) zones can return to their homes.

Fire officials announced the change on Thursday morning, saying the fire was now 23% contained and crews had established containment lines to keep the fire from spreading further.

“That’s been our main goal since we’ve gotten here, to get a line around the fire, to keep it as small as we possibly can,” said Natalie Webber, public information officer for Oregon Department of Forestry Incident Management Team 2.

On Sunday, the fire exploded in size when it broke containment lines as warm temperatures and strong east winds fueled the flames. It prompted fire officials to quickly establish evacuation notices for thousands in the Camas and Washougal area.

The fire started Oct. 9 in Washington’s Larch Mountain area and has burned around 1,900 acres. Officials believe people setting off fireworks may have sparked the flames. They’re looking to identify two men and two women seen by witnesses in the area around the time the fire started. Video released showed a white or light-colored Subaru parked in a clearing of trees.

RELATED: Nakia Creek Fire may have been started by people shooting off fireworks, officials say

Smoke from the fire has contributed to the air quality in the Northwest being among the worst in the world. It’s expected to improve Thursday afternoon and evening as cooler winds blow in.

“We understand smoke is a nuisance, I don’t like breathing smoke anymore than the next person,” said Matt Howard, incident commander for the Oregon Department of Forestry Incident Management Team 2. “So we put these fires out as quick as we can, we get people back into their homes and get back to their daily lives and breathing clean air.”

Rain is also expected to arrive on Friday that will help crews on the fire line.

RELATED: Air quality in Portland is among the worst in the world. When will it improve?