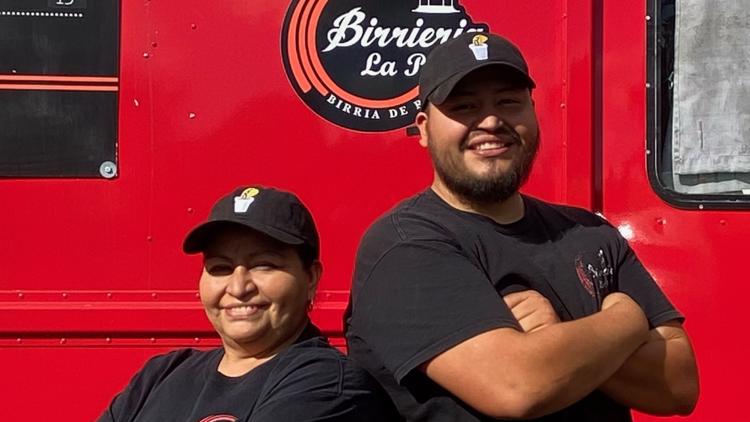 Birreria La Plaza is a Mexican-owned taco truck in the Hazelwood neighborhood that specializes in birria — with a family recipe dating back to the 1960s.

PORTLAND, Ore. — Birreria La Plaza is a Mexican-owned family taco truck in the Hazelwood neighborhood of Southeast Portland that specializes in birria tacos.

Birria is a traditional Mexican beef dish that is slowly cooked in a broth made with chili peppers and other seasonings. The meat is left to cook and soak in the broth for four-plus hours. But Birreria La Plaza isn’t cooking with just any recipe.

“We kind of took down our family recipe and started turning it into street food, tacos, tacos de birria,” said Oracio Hernandez one of the owners of Birreria La Plaza. “Thankfully, it has been a success.”

Hernandez is the co-owner of the stand — alongside his mother Doña Sofia — whose family’s birria recipe has been passed down generation after generation dating back to the 1960s.

Birria has boomed in Portland in recent years with more birrerias popping up around the area. In Mexican culture, it’s typically served for big life celebrations — events like weddings, birthdays and quinceañeras. But Oracio said his mother’s birria recipe was too good not to share the community.

“I wish they had multiple [taco] trucks all throughout the city,” said Angelique Williams a loyal Birreria La Plaza customer. She eats here at least three days a week and said she enjoys the hospitality and the mouth-watering food.

“You will not be disappointed and you’re going to enjoy the flavor, you don’t even need the hot sauce that comes with it,” said Williams.

Since opening at the end of 2019, Birreria La Plaza has reached people from all over Oregon. They won best new food carts of 2020, were in the top 15 outstanding PDX food carts and top dine-outs in Portland.

Something Hernandez and his family take pride in — after they weren’t so sure about starting their own food business.

“They had their doubts like anyone starting a business, but now [my parents are] proud,” said Hernandez.

Proud of having the opportunity and support in sharing a little part of their Jalisco family roots — one taco at a time. Something the Mexican culture honors — cooking and eating together with the people you love.

“We have that in our culture. To be dining, sharing experiences. So. I’m just glad that when other families come out here and fill up our little dining hall it’s crazy to me to see that happening in real life,” said Hernandez.

Hernandez told KGW that they will be opening up their own restaurant storefront in the coming months in Southeast Portland, a milestone they already dreamed of.

They will post more details of their next project on their social media platforms.