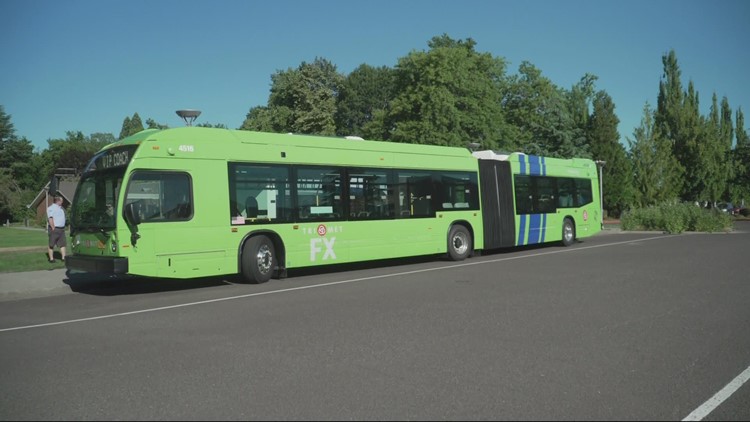 The 60-foot buses debuted in September on the new FX-2 line, but TriMet pulled them out of service two weeks ago when it discovered a mechanical problem.

PORTLAND, Ore. — The 60-foot “bendy” buses on TriMet’s FX-2 line are going to remain off the road for at least a few more weeks. The buses were pulled from service in early November due to a mechanical issue, and TriMet announced Friday that the manufacturer of the buses has now issued a national recall for the defect.

The fleet of 31 articulated buses is practically brand new, first hitting the streets in September when the FX-2 line launched. The Portland-to-Gresham route on Southeast Division replaced the previous Line 2, which was among TriMet’s busiest and was previously served by regular 40-foot buses.

The $175 million FX-2 project included the new buses themselves and a host of upgrades along Division such as new stations to allow for faster boarding and traffic signals that let buses skip past traffic.

But the upgraded line got off to a rocky start when, barely a month after the launch, TriMet announced that it had temporarily pulled the entire 60-foot bus fleet from service and gone back to running 40-foot buses on Division.

TriMet said it had discovered a mechanical issue during a routine inspection of one of the buses and then checked and found the same problem on six others, prompting it to suspend service out of an “abundance of caution.”

The manufacturer of the buses, Canada-based Nova Bus, had previously issued a recall in August for steering gear equipment. The TriMet fleet didn’t use the equipment in question and wasn’t part of that recall.

However, TriMet announced Friday that the mechanical issue on its own buses has now prompted Nova Bus to issue a new recall for that specific defect.

Nova Bus determined that vehicles with a particular steering gearbox might not have “sufficient clamp load,” which TriMet said means the bolts that connect the steering gear box mounting plate to the bus frame cannot be tightened enough to prevent them from coming loose.

In practical terms, the defect runs the risk of the buses losing steering, TriMet said, although the agency stressed that there were no in-service incidents from the defect and no TriMet operator ever lost steering on an FX bus.

Nova Bus has advised TriMet of a likely fix involving swapping out one of the components in the mounting plate assembly, the agency said, but it’s still waiting for confirmation of the solution.

TriMet said it hopes to have the fix confirmed by the end of November, which would allow it to begin conducting testing and hopefully return the buses to service at some point in December.

In the meantime, the Division route will continue to be served by 40-foot buses, which will have the same frequency and traffic light priority as the bendy buses, the agency said.