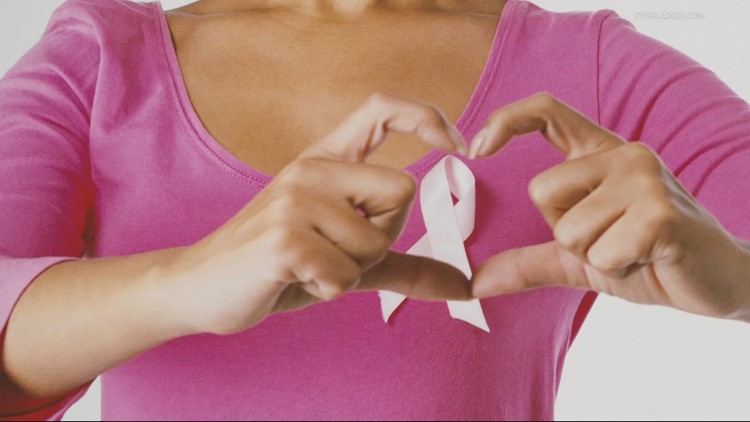 Kelvin Woods shares his breast cancer journey in hopes of encouraging men to get proactive about their health and learn more about their risk for the disease.

PORTLAND, Ore. — October is Breast Cancer Awareness month, and while the disease overwhelmingly affects women, men are also at risk.

“Breast cancer is something that men can get too, and men need to be proactive about their health just like anybody else,” said Kelvin Woods.

Woods is a breast cancer survivor who shares his story hoping to save lives.

“As a guy, we’re not used to hearing things like that; not used to being told, ‘hey you may have breast cancer,’” he said.

More than 2,700 men are diagnosed with breast cancer each year. About 530 men die from the disease, according to statistics from the American Cancer Society. In comparison, about 287,850 women will be diagnosed this year and 43,350 will die.

Male breast cancer accounts for less than 1% of all breast cancer diagnoses, which is one reason men may ignore the symptoms. That delay, however, can lead to later-stage diagnoses and potentially worse outcomes.

Woods’ journey started in 2013 when he found a small lump in his right breast. He thought it was a bug bite, but when it didn’t go away, he went to a surgeon.

“He actually just took one quick look at it, and one glance and one touch and he said, ‘Hey, we need to get this out because it’s a possibility it could be more than just something else – it could be breast cancer,’” Woods said.

It was early stage two breast cancer. Woods says he was lucky, and the cancer was caught before it spread. Doctors were able to remove the lump and after chemo and treatment, he has been cancer-free ever since.

While there are not nearly as many support groups for men going through breast cancer as there are for women, Woods said found support in the community.

“I definitely took advantage of the American Cancer Society and the Making Strides Walk,” he said. “I’m a part-time DJ. So, I DJ some of the events, just along the route.”

On Saturday, October 8 he will be back at Making Strides of Oregon and SW Washington.

“I’m just looking forward to just being at the event, just being around a bunch of people – some people who have been through the same type of situation as I’ve been in,” he said.

“Making Atrides Against Breast Cancer has been around for 30 years – since 1993 – and we’ve created the largest network of breast cancer survivors and thrivers,” American Cancer Society Development Manager Caitie Clifford said. “So, really what we aim to do is celebrate our survivors, support those who are currently battling breast cancer, and also continue the movement to raise funds to be able to support research grants and find a cure to breast cancer.”

That movement and awareness have been lifesaving. Between 1989 and 2019, the breast cancer death rate dropped 42% because of early detection. That’s thanks primarily to advanced cancer screenings and advancements in treatment, Clifford said.

Woods said he hopes to be part of that positive impact by sharing his story and support for those continuing to fight.

“Hey, this is my opportunity to share with men and share with other people what I’m going through and what we need to do, as men, to be proactive,” Woods said. “Put your macho ego down. Don’t think that you can just put duct tape over everything and it’s going to fix everything. Be proactive about your health.”

Making strides of Oregon and Southwest Washington is happening Saturday, October 8 at the Portland International Raceway. Check-in starts at 9 a.m. and the walk is at 10 a.m.

For more information visit cancer.org and register for the local walk here.