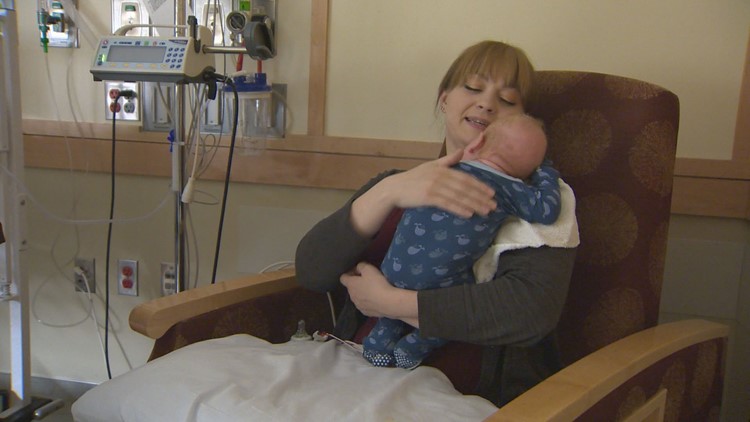 CORVALLIS, Ore. — Scientists have long known that pollution, including vehicle emissions, is not good to breath. Now a new study by Oregon State University researchers shows that the pollution intensified by traffic congestion has a measurable effect on pregnant mothers who live near it and their babies.

“So our takeaway result was that we do see this additional impact of congestion in and above normal traffic patterns and normal air pollution levels,” said OSU associate professor Perry Hystad, who is a co-author of the study.

Researchers released their study on Friday, which measured traffic congestion in a unique way.

Hystad said their study focused on Texas, measuring congestion across the entire state based on cell phone data. The more phones concentrated on a roadway the more congestion and carbon dioxide emissions.

RELATED: Donated breast milk for babies now easier to get in Southwest Washington

Then they looked at births related to what they found on the road.

“We specifically looked at full-term birth weights which is how big babies are when they’re born, and we found that this additional impact of congestion was about 10% of what the impact of smoking during pregnancy is,” Hystad said.

Hystad added, while the average impact on healthy births is not that great, the long-term impacts are more concerning, as babies grow up to face various health risks.

RELATED: In first of its kind water birth study, OSU researchers find no increased risk of death or major trauma

Researchers were also able to look more broadly at congestion across the U.S In terms of congestion and estimate 27% of moms affected by gridlock-intensified pollution.

“And so that really highlighted for us that even though the increased risk is fairly small, it impacts a quarter of all pregnancies in the U.S.”

So, how can we use this information to improve conditions for moms and their babies?

Hystad said it starts with making changes to transportation infrastructure already built, or to come.