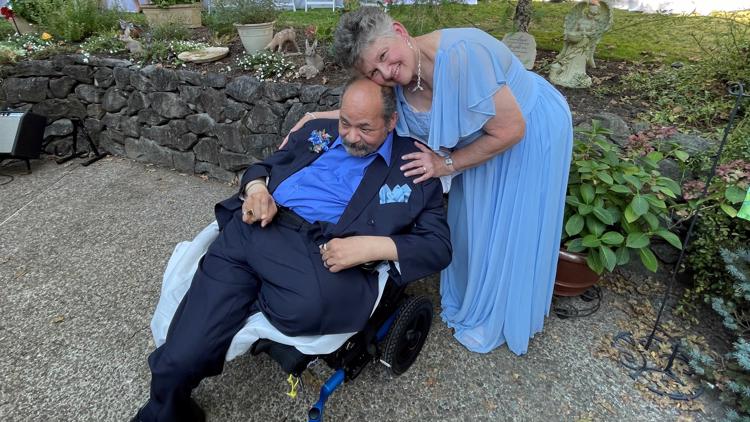 PORTLAND, Ore. — Former college sweethearts Jeanne Gustavson and Steven Watts never stopped loving each other. Whether it was while they were college sweethearts in the 60’s at Loyola University in Chicago—or even after the two parted ways seven years later, due in part to racist family members.

Last summer, when they reunited after 40 years, it was clear to the pair that their love for one another was as strong as it had ever been.

On Saturday, the two made their love official by getting married in a backyard wedding at their Northwest Portland home.

“I’ll love you forever,” said Gustavson, 69, while reciting her vows to Watts, 72. “You’re my soulmate, my best friend and I want to share forever with you.”

The couple first shared their story with KGW in 2021.

RELATED: ‘I didn’t know how much he loved me’: Portland woman searches for college sweetheart 42 years after breakup

Gustavson had just searched for and found Watts at a nursing home in Chicago. He had suffered two strokes, had been homeless for a time, and had lost a leg.

Gustavson, a retired nurse, moved Watts back to Oregon with her where she has helped care for him ever since. Gustavson shared that while they were together in college, she had to keep their relationship a secret from her family because they didn’t approve of interracial dating.

She said she had always regretted breaking up with Watts and is thrilled that the pair are enjoying a second chance together.

On Valentines Day, the couple shared that they were engaged. They also shared how grateful they were for the support they’d received from people around the world.

RELATED: Portland couple who reunited after 42 years plan to marry