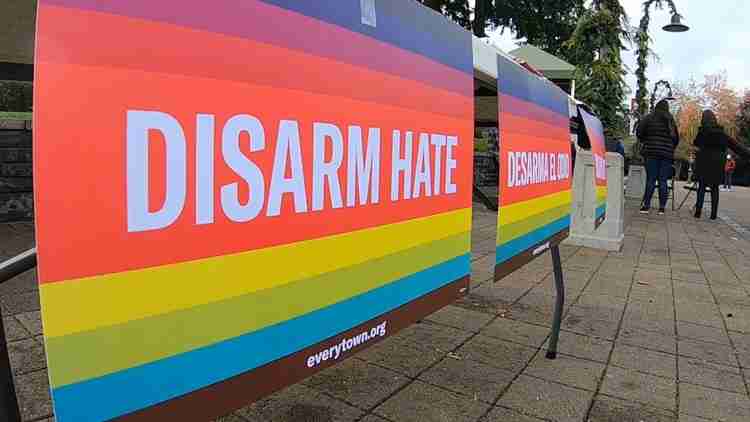 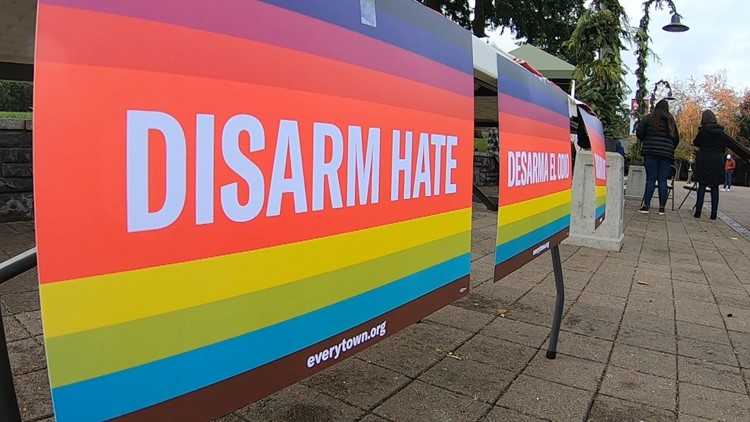 Members of the LGBTQ community organized a rally Saturday, to call for an end to gun violence and hatred, following the deadly shooting one week ago.

LAKE OSWEGO, Ore. — A week ago in Colorado Springs, five people were gunned down inside Club Q, an LGBTQ nightclub. More than a dozen more were injured in the mass shooting, before patrons stopped the alleged shooter.

Throughout the week, people gathered at vigils and rallies all over the country to mourn the lives lost and to call for an end to gun violence.

On Saturday, student organizers held a vigil at Millennium Plaza Park in Lake Oswego. While they didn’t know the victims personally, they told KGW it’s important to remember them. As members of the community, they felt compelled to organize a space to grieve together, and fight for properly enforced common sense gun legislation.

“I was really grateful to be able to have this space,” said Flynn Williams, “I think it’s really easy after a mass shooting to become desensitized because there are so many, but I think it’s important to hold face for people to recognize that it’s a terrible experience.”

“For us, I think it was especially important following the shooting at Club Q to show the LGBTQIA+ community, as members of that community, that we are here for them,” said Peren Tiemann.

Those in attendance Saturday, like Shannon Walton Clark, are still recovering from the heartbreak.

“As a queer, nonbinary person, married to a queer, genderqueer person, our household just broke,” they said, “I know what it’s like to have a dance club and a gay bar be the only safe place. I know what it’s like for that to be the sanctuary and every time this happens, it’s that feeling like it could have been one of us. It’s that moment of knowing that this is all of us at the same time.”