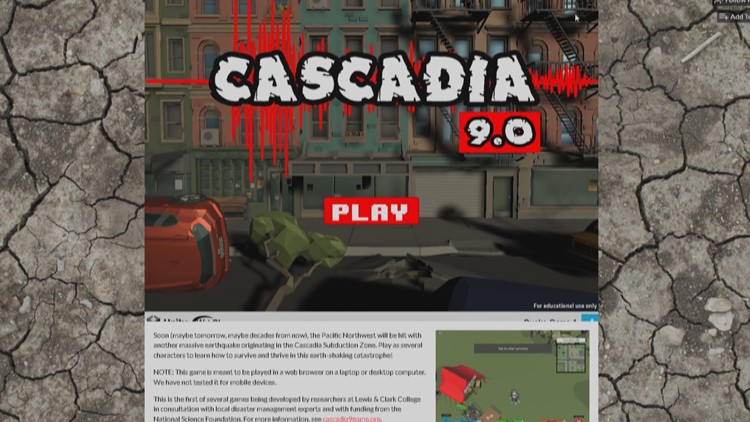 The game is called Cascadia 9.0 and was created by professors and students at Lewis & Clark College.

PORTLAND, Ore. — Just in time for the Great Shakeout on Thursday, professors and students at Lewis & Clark College created a video game that helps people prepare for earthquakes.

Associate Professor of Geological Science Liz Safran said, “this is a good way to incorporate technology into earthquake preparedness.”

The player navigates through a devastated city looking for their dog who escaped in the aftermath of a massive earthquake. Whether the character is in the right or wrong place during the earthquake, determines their fate.

“Doing the right thing in the right moment requires practice and in a way the video game kind of lets you have some of that practice,” Safran said.

Safran said the game teaches you what you should do in case the infrastructure is disrupted, which could happen. Two weeks ago, Oregon had a 4.4 magnitude earthquake outside of Salem in Linn County. There was no real damage, and no one was hurt but it’s a good wakeup call.

“Step one is making sure you survive the earthquake, so drop, cover and hold on is one of the most important things you can do,” Safran said.

Experts said people should have water stockpiled, seven gallons per person. The game puts you in situations to decide whether to use unpurified drinking water, what happens during aftershocks and gas leaks. It took a year to create. Student Kyler Washington is from Texas and never experienced an earthquake before.

“I feel like the drills provide some form of clarity and insurance for people like me,” Washington said. “Having some form of information is better than having none.”

If people want to play the game, they can go here.

The Great Shakeout is a worldwide earthquake drill that many organizations and people participate in annually to promote earthquake readiness. This year, it lands on Oct. 20 at precisely 10:20 a.m. local time. Anyone can participate by registering on the ShakeOut website.