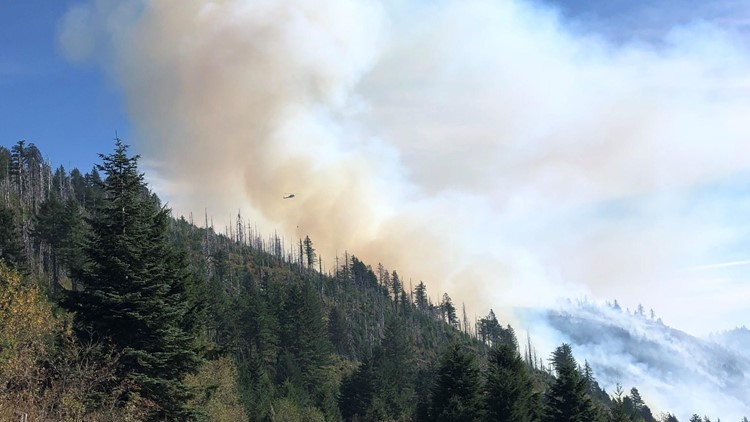 Due to severe weather conditions this weekend, fire activity has increased and new evacuation notices are in place.

Anyone within 3.5 miles of the fire are now in a Level 3 “go now” order and should evacuate to the south toward Washougal River Road into Washougal.

Anyone within 5.5 miles of the fire are now in a Level 1 “be ready” order.

The fire is currently at approximately 156 acres in size and 20% contained.

Red Cross Cascades has open a shelter location in Washougal at the request of CRESA. The evacuation shelter is located at the Camas Church, 2204 Northeast Birch Street, Camas, Wash.

Updated evacuation zones for the #NakiaCreekFire

Here’s what the evacuation levels mean

Level 1 Notice – Be Ready: Residents should be aware of the danger that exists in their area and monitor local media outlets for information. Residents with special needs should take note and begin making arrangements to evacuate. Evacuations at this time are voluntary.

Level 2 Notice – Be Set: This level indicates there is significant danger to your area, and residents should either voluntarily relocate to a shelter or outside of the affected area, or if choosing to remain, to be ready at a moment’s notice. Emergency services cannot guarantee that they will be able to notify you if conditions rapidly deteriorate.

Level 3 Notice – Go Now: Danger to your area is current or imminent, and you should leave immediately. Listen to local media and watch for emergency personnel who may be coming by to give further instructions regarding the evacuation.

The Nakia Creek Fire has burned 250 acres since Oct. 9.

Monday evening, Clark Regional Emergency Services (CRESA) sent out an emergency notification to about 110 homes within the designated zones set by the Incident Management Team as a precautionary measure.

The notices are voluntary and precautionary. Anyone living in those areas is urged to prepare to evacuate and make plans to relocate livestock, if necessary. CRESA plans on providing a better fire perimeter map and more information on the various notice zones on Tuesday.

Click here for a map of the evacuation zones

The Washougal School District said several school buses were delayed or some routes were combined Tuesday morning due to bus drivers being impacted by the evacuation notices.

Fire officials are still investigating the cause of the fire, but the Washington State Department of Natural Resources (DNR) said it was human-caused because there was no lightning in the area when it started.

Crews first responded to the wildfire at 4:37 p.m. Sunday afternoon. The Nakia Creek Fire is burning in grass and brush.

Ryan Rodruck with DNR said they have multiple engine companies and three helicopters that are working on the fire. Rodruck said they were expected to add more helicopters to attack the fire by air.

A spokesman with East County Fire & Rescue described the fire as “very remote and very rural.”

However, the mountaintop wildfire is very visible. Flames were reported to KGW by people in east Vancouver, Camas, Washougal, Gresham, Troutdale and even atop the hills in Southwest Portland.

This past Friday, Washington State Commissioner of Public Lands Hillary Franz, declared fire season over. It was a season that saw the fewest acres burned over the past several years.

“Right now we’re looking at 140,000 acres burned this year, which is significantly lower with our 10-year average,” Rodruck said.