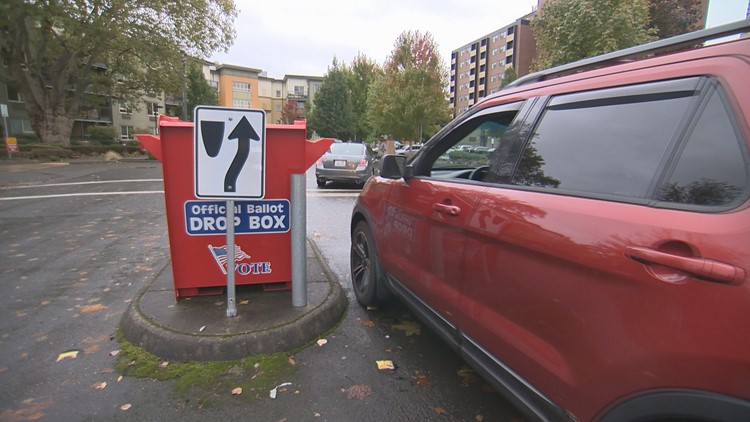 As people continue to drop off their ballots in drop boxes, election officials want anyone with ballot questions to get them answered soon.

PORTLAND, Ore. — As people across Oregon and Washington continue to drop off their ballots in drop boxes ahead of Election Day, election officials want anyone with questions or ballot issues to get those figured out at their local county’s election headquarters.

In Multnomah County, Director of Elections Tim Scott said Monday that voter turnout was around 34%.

“Which is about six percentage points behind where we were on the same day four years ago in 2018, the last gubernatorial election,” Scott said. “We’re trending a little lower, so I think we’re going to see really high returns today or tomorrow.”

If people are planning to mail their ballots in, it has to have a postmark no later than Nov. 8 to be accepted.

“It does have to be received within seven days after the election,” Scott said. “That should be plenty of time if you’re giving it to the USPS on the eighth.”

The deadline to vote in Oregon is 8 p.m. on Election Day. Anyone can vote in person until that time, or drop a ballot off at one of the 31 drop sites throughout Multnomah County or other official drop sites in Oregon.

In Clark County, Wash., Liz Suchinda just dropped her ballot off at one of the drop boxes.

“It’s freedom — you have everything here in this country and it’s so important to get your voice heard,” Suchinda said.

RELATED: How to turn in your ballot in Oregon and Washington

Clark County Auditor Greg Kimsey said voter turnout is around 36%, which is also lower than usual by the day before an election. He said things should pick up on election day. Clark County is still sticking with a 70% turnout projection.

Kimsey said if people have questions or are confused about something they can call the county elections office.

“If you’re in a ballot drop box line at 8 p.m. we are going to determine the end of that line and we’re going to make sure you get to vote with your ballot,” Kimsey said.

In Washington, ballots must be postmarked by Election Day and received at an elections office by Nov. 28 for them to be counted, according to Kimsey.