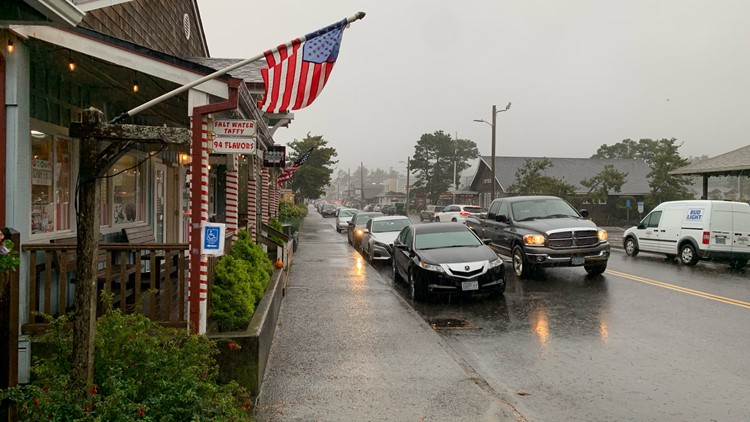 An atmospheric river arrived to soak much of the Pacific Northwest Friday. On the Oregon coast, that also means high seas and big waves this weekend.

TILLAMOOK, Ore. — The Oregon coast is expected to get hit by high seas and big waves Friday and through the weekend, in addition to the same high wind and heavy rain hammering much of the rest of western Oregon as an atmospheric river closes in on the Pacific Northwest.

The National Weather Service Portland office tweeted a warning Thursday morning for boaters and mariners in southwest Washington and northwest Oregon, forecasting strong winds Thursday night and Friday with gusts up to 25 knots, plus high seas from Thursday night through Sunday.

The National Oceanic and Atmospheric Administration also issued a high surf advisory for the south central and southern Oregon coast, set to begin Sunday morning and continue through Monday morning, with large breaking waves of 20 to 26 feet.

A separate NOAA flood advisory for much of western Oregon including Columbia, Clatsop and Tillamook counties warned of elevated rivers and streams Friday and possible minor flooding in low-lying or poor drainage areas.

The coast was expected to see anywhere from three to six inches of rain Friday, according to KGW meteorologist Rod Hill. High wind warnings are also in place for the coast range, and the National Weather Service forecast for the Tillamook area mentions the possibility of thunderstorms Friday and Saturday night.

RELATED: Timeline: Atmospheric river will bring heavy rain and wind to the Northwest

Impacts to residential power on the coast were fairly limited as of midday Friday. Pacific Power, which serves the northern end of the Oregon Coast, reported about 35 customers affected by outages, while Tillamook PUD reported none and Central Lincoln PUD reported just a few.

Only one major coastal traffic incident had been reported as of midday Friday: a crash about nine miles east of Astoria that closed all lanes in both directions on Highway 30, according to the Oregon Department of Transportation’s Trip Check map.

RELATED: Wind and rain hit Mt. Hood area with a foot of snow expected by end of weekend

The Portland metro and Mt. Hood areas were also both deluged Friday, with high wind warnings and more rain predicted later in the day, plus snow over the weekend on the mountain.