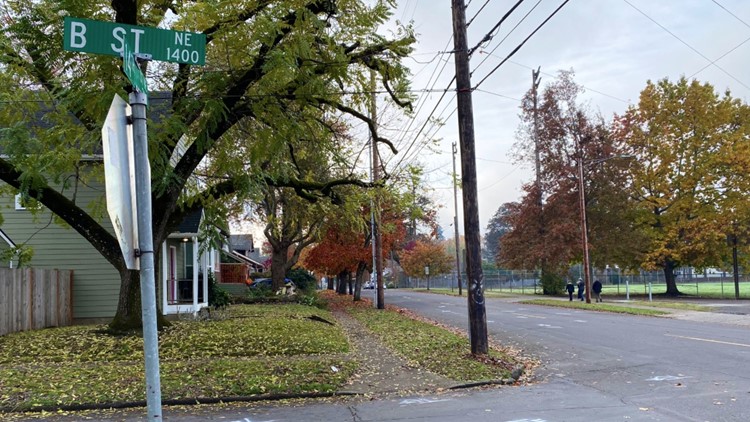 After the shooting, police took two suspects into custody but couldn’t find the third right away. There have been no reported injuries.

SALEM, Ore. — A calm, residential neighborhood near Salem High School was a chaotic scene Saturday night during an officer-involved shooting which started with a stolen car several blocks away.

White spray-painted marks on the street left by police are now a stark reminder for families that no neighborhood is immune to the rise in crime happening in large cities like Salem.

Salem police said it all started around 6:30 p.m. on Southeast 17th and Hines Street when two men tried to steal a woman’s car. As police were investigating, they found a previously stolen vehicle several blocks away on Northeast 18th and Center Street. When police tried to stop that car, the driver sped off. Three men were in that car and they eventually stopped on the corner of Northeast 14th and B street and ran from police on foot. It was around 7 p.m. when Salem police chased after them and that’s when the suspects and police started shooting at each other. There have been no reported injuries.

During the shooting, there was a school play and a cheerleading competition happening right across the street at Salem High School.

“It was kind of frightening,” said Theresa Shelley whose granddaughter was performing in the play. “My daughter and son in law were there watching it and I was just worried something was going on there,” she said tons of police cars raced by her house. She lives near where the shooting happened.

“It’s frightening this is basically a good neighborhood really but there are things that happen you know,” she said.

After the shooting, police took two of the suspects into custody but couldn’t find the third man right away, even after using a K9 to search. They also took a handgun from the scene.

“Maybe I should be carrying pepper spray or something,” added Shelley who is now on edge.

Oregon State Police are now investigating and the officer involved in the shooting has been placed on administrative leave per the department’s protocol.