'It's a loss': Black-owned Portland dispensary vandalized, burglarized within a week 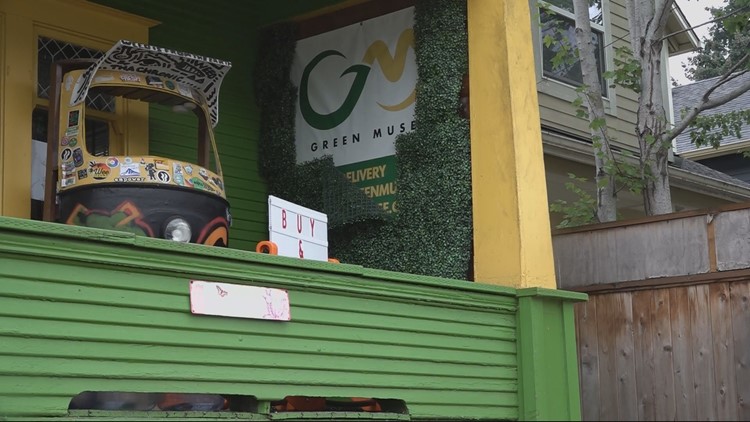 The Green Muse dispensary on Northeast 16th Avenue and Northeast Killingsworth was vandalized with a racist symbol left on the porch.

PORTLAND, Ore. — A Black-owned dispensary in Northeast Portland was vandalized and burglarized within a week. The owner hopes the community can help his small business bounce back following the loss.

Karanja Crews, the founder of Green Muse dispensary, said about a week ago, someone was caught on camera lighting something on fire on the porch of the business. There was also a symbol of a cross inside a circle left of the porch. The symbol can be used to mean white supremacy.

“We are still in Oregon, so I wasn’t super surprised,” Crews said. “I’m born and raised here, I’ve seen skin heads growing up.”

Crews said he thinks his business is being watched.

“I was thinking that we’re a target,” Crews said. “I was starting to feel that we’re being watched. I had a feeling that once this happened that people had been watching.”

Unfortunately, the vandalism isn’t the only worry for the Green Muse dispensary. On Thursday morning, all their product was stolen. Crews said the criminals broke the safe and stole everything out of it. They are now trying to make up for the $35,000 loss. The timing is terrible because they just cancelled their insurance.

“Business insurance is very expensive,” Crews said. “We had to cut that expense do to the recession and lost sales. We had to cut it last month, so we’re not covered for this particular month so it’s a loss.”

Crews said police were called on both incidents. He said he hopes the community can come together and help his small business recover. If people do want to donate, they can go to the dispensaries GoFundMe page. Crews said there will also be a fundraiser outside his dispensary on Saturday, Oct. 1.