‘It sucks you in’: Portland’s homeless struggle to get off the streets despite increase in shelters 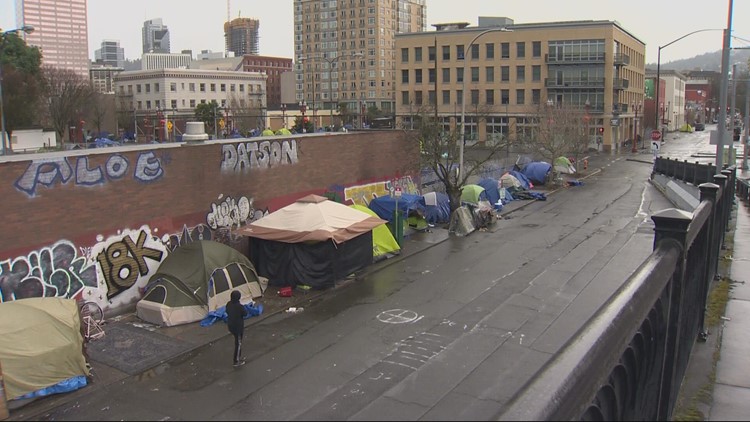 This year’s Point-In-Time count shows more than 5,000 people are experiencing homelessness in Portland and Multnomah County. More than 3,000 are chronically homeless

PORTLAND, Ore. — RVs, broken down cars, piles of metal and makeshift huts line one side of Northeast 33rd Drive. Dead rats are pressed into the pavement after being run over by the constant rush of cars. This is where dozens of people have called home for years, and they can’t seem to find a way out.

“We were supposed to be here for three weeks and it’s been six years,” said Shelby Ryan while reorganizing the piles of metal she’ll later sell for grocery money. She just celebrated her 60th birthday on Halloween.

“I’m not used to being on the street,” she continued. “I don’t want to be on the street. I’m used to my five-bedroom house and my two bathrooms and my two and a half acres.”

“You lose everything because you can’t think, and then you end up here,” she said, referring to the spot on side of the road that she calls her own.

Ryan’s story isn’t unique. She is one of the more than 3,000 chronically homeless people in Portland. The federal government’s definition of chronic homelessness is when a person has been homeless for more than a year and has at least one disabling condition.

Working to get people like Ryan off the street is the county’s Joint Office of Homeless Services. Last year, they helped more than 4,000 people leave homelessness. Yet the problem keeps getting worse.

According to the county’s full Point-In-Time count released last week, 20% of people in shelter were chronically homeless in 2015. By 2022, that share grew to 65%. And that number doesn’t include those living outside.

“In a world where you can literally help 4,560 people end their homelessness and you still see what we see … it goes to show that there are other forces at play here and it’s really challenging,” said Denis Theriault, spokesperson for the Joint Office of Homeless Services.

RELATED: ‘I’m ready to go’: Homeless people face barriers getting off the streets due to felony charges

Half the JOHS budget is now dedicated to expanding and operating shelters. They’ve opened motels, Safe Rest Villages and congregate shelters, all of which are out of the question for many living on the streets.

“People have claustrophobia, and it’s not like we can just live in a room that’s like the size of a bathroom,” said Tara Pietromonaco, who lives a few RVs down from Ryan.

“Just some of the things are just really backwards. I just don’t get it out here. Sometimes I just want to just walk out the door and just walk away from it all and just let it all go, you know,” she said.

“The people come down and they want to help you and different agencies and resources, and we thank them so much but then when it comes down to it, they come by one time and talk to us and never come back,” added Ryan.

The Point-In-Time counts report goes on to say that ending homelessness will come from focusing on the factors that push people onto the streets in the first place such as rising rents, not enough income, racial injustice and physical and behavioral health problems.