Incumbents win 3 Oregon House races, others too soon to call 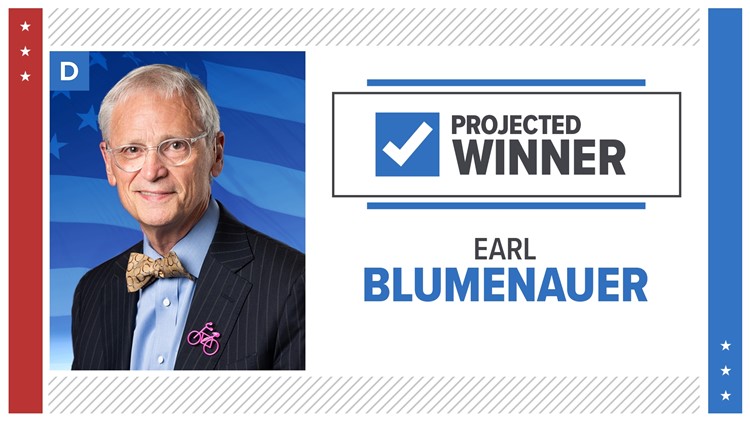 Democratic and Republican incumbents in Oregon’s 1st, 2nd and 3rd Congressional Districts won reelection to the U.S. House of Representatives.

PORTLAND, Ore. — Democratic and Republican incumbents in Oregon’s 1st, 2nd and 3rd Congressional Districts won reelection Tuesday to the U.S. House of Representatives, with the state’s other three seats still up for grabs.

Democrats Suzanne Bonamici in the 1st and Earl Blumenauer in the 3rd held their districts, which both include parts of Portland, while Republican Cliff Bentz was reelected in the 2nd, which covers the state’s eastern half and much of the south.

Hours after partial returns were released by Oregon’s secretary of state, it was too early to call the other races.

A toss-up in the 5th District and a closer-than-expected race in the 6th have Democrats battling to maintain their advantage in the state as Republicans seek to capitalize on concerns about inflation and crime.

Democrats controlled four of the state’s five previous U.S. House seats and are hoping to claim its newly created sixth one as well. Oregon was one of just six states to gain a seat after the 2020 census.

The most hotly contested race is in the 5th, which stretches from Portland’s affluent southern suburbs to the central high desert city of Bend and includes the rural, mountainous areas in between.

Republican Lori Chavez-DeRemer, a businesswoman and former mayor of the Portland suburb of Happy Valley, is hoping to flip the district red for the first time in over two decades. The super PAC linked to House Republicans, the Congressional Leadership Fund, has spent more than $2.7 million on several ads there.

Chavez-DeRemer is one of two candidates running to be Oregon’s first Latina elected to Congress, along with Democrat Andrea Salinas in the state’s new 6th District.

The 6th also includes parts of Portland’s southern suburbs, along with the state capital, Salem, and more rural areas. Many analysts view it as leaning Democratic.

Salinas, a state representative and former congressional staffer, is up against Republican Mike Erickson, a businessman who is running for Congress for a third time.

The retirement of longtime Democratic incumbent Peter DeFazio, who was first elected in 1986, has created an open seat in the 4th District. The district spans the central and southern coasts, and includes rural conservative areas but also the more populous and liberal college towns of Eugene and Corvallis. Republicans are eyeing it, but the district is widely seen by analysts as leaning Democratic; it last sent a Republican to the House in 1972.

Oregon Labor Commissioner and former Democratic state Rep. Val Hoyle is vying to keep the 4th blue, while Republican Alek Skarlatos is running his second campaign for the seat. Skarlatos, a former member of the Oregon National Guard, gained fame in 2015 for helping thwart an attack by a heavily armed gunman on a train bound for Paris.

Editor’s note: Val Hoyle is projected to win the U.S. House 4th Congressional District, according to The Oregonian.