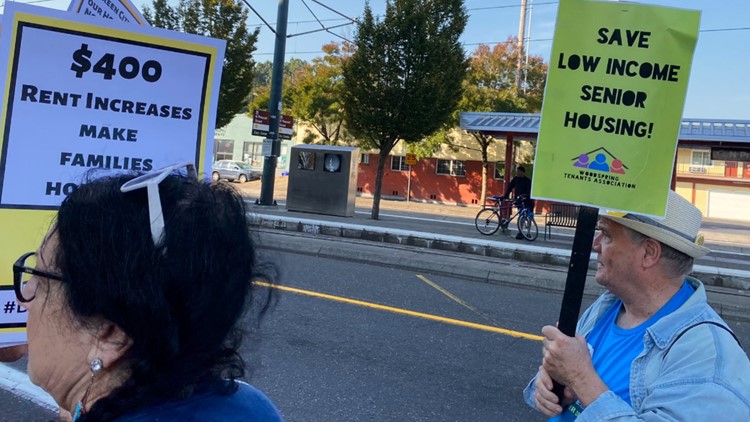 Portland limits rent increases for affordable housing to 5%, but through a city program, some buildings are exempt from that limit for 10 years.

PORTLAND, Ore — Dozens of low-income tenants and supporters filled the sidewalk outside The Prescott Apartments in North Portland on Monday morning to protest a recent rent increase of nearly 50%, asking the management company to reduce it to 5%.

“My rent is almost doubling,” said Kelsey Schreiner. She’s been living at The Prescott for nine years and her rent has been raised twice. The latest increase was $403, a 43% jump.

“I’ve got a four-year-old daughter and I’m in school full time for psychology and I don’t know how I’m going to cover that,” Schreiner said. She said there’s no way she can afford to live there anymore.

“When your chest just feels like it’s going to collapse and you have no stability — that’s what it feels like,” she said.

Another tenant, Shela Cecchini, said her rent went up $250.

“Essentially, that was going to make my rent the entirety one of my paychecks,” she said. “I already live paycheck to paycheck.”

Portland limits rent increases for affordable housing to 5%, but through a program called the Multiple-Unit Limited Tax Exemption or MULTE, buildings that are newer than 15 years old, like the Prescott, are exempt from that limit for 10 years. The MULTE program at The Prescott expires next year, meaning rent could soon increase for tenants there even more.

In a letter to tenants, Green Cities Property Management, an investment company that recently bought the building, said the increase is justified because residents’ rent has not been raised for several years, resulting in the rental rate being below MULTE limits. They’ve offered to pay the increase through the end of January and gave tenants who wanted it money to move. Schreiner got $4,200.

The tenants are asking for the 50% increase to be removed and changed to a 5% increase.

The management company delayed the increase to take effect in 90 days.

Hear from tenants plus how this rent increase on affordable housing is legal tonight on @KGWNews. pic.twitter.com/GJ4pxxwIVR

KGW reached out to Green Cities but hasn’t heard back yet. Meanwhile these tenants formed a union and are turning to the city for help. If nothing gets done in time, they’re asking for their rent to be subsidized by the city.

“People have moved out of homelessness and into The Prescott and into these other MULTE units. That should be a success. It is not a success if those same people get pushed back out of their housing into tents,” said Margot Black, one of the protest organizers and founder of Portland Tenants United, a nonprofit that advocates for Portland tenants.

The fear of becoming homeless is now top of mind for many of these tenants.

“This type of rent increase, it’s not a new lease, it’s an eviction without being an eviction,” Cecchini said.

“If I have to move, I can’t move anywhere else in the city,” Schreiner said. “I will be homeless or I will have to go to some other state.”

These tenants and supporters aren’t backing down anytime soon. They have a petition with about 300 signatures. They’re sending it to Housing Commissioner Dan Ryan. KGW reached out to Ryan for comment but hasn’t heard back yet.

“We’re gearing up for a fight that we’re not going to stop until we win,” Black said.

Commissioner Jo Ann Hardesty showed up to the rally in support of the tenants. She said city council needs to take immediate action to prevent these types of raises.

Rene Gonzalez, who’s running against Hardesty for city council, was not at the rally but told KGW in a statement: “We need to substantially increase new housing units in the city as soon as possible to bring down the cost of living for all Portlanders, particular our most vulnerable residents. In the meantime, we need to assure effective rental support for those at risk of housing instability. This will require more than protests and I look forward to working collaboratively at city hall on solutions that have an immediate impact moving Portland forward.”

RELATED: Portland renters can apply for relocation assistance in 2023 if their rent goes up 10% or more