'I came here because Oregon is dangerously close to flipping red' | Sen. Elizabeth Warren campaigns for Tina Kotek in Portland 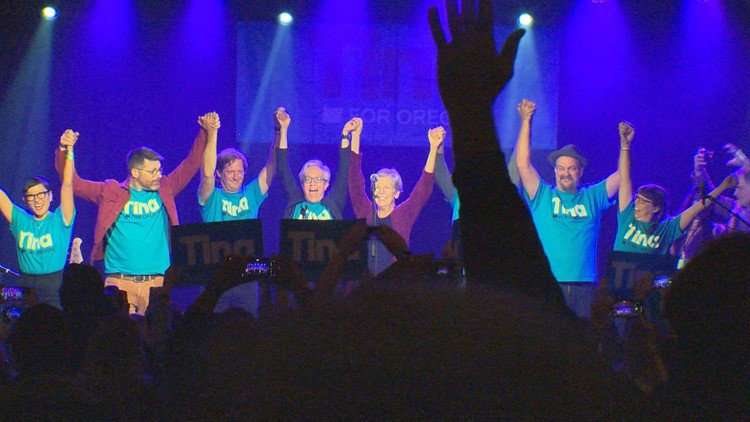 With just over two weeks until Election Day, the Senator from Massachusetts stopped by the Rose City to make a final plea to voters in the race for Oregon governor.

PORTLAND, Ore. — Candidates in Oregon are pushing their platforms and working hard to win over voters in the final stretch before Election Day. Part of that strategy includes appearances and endorsements from big name politicians, which is especially true when it comes to Oregon’s race for governor.

A week after President Joe Biden visited Portland to campaign for Tina Kotek, Sen. Elizabeth Warren made an appearance at a Kotek rally, at the Wonder Ballroom on Saturday night.

“I didn’t come here because I believe this is a safe seat. I came here because Oregon is dangerously close to flipping red, and we have 17 election days to keep that from happen,” Sen. Warren told the crowd.

The Senator from Massachusetts pleaded for attendees to keep door-knocking, phone-banking and rallying support around Kotek.

“I will be a governor for the entire state,” said Kotek, “And on day one, we’re going to get to work – taking on our homelessness challenge, making sure people have access to mental health and addiction treatment. We have work to do here and we don’t have to become a right-wing state to fix our problems.”

“If this were head-to-head, Tina would be ahead by like, a zillion points,” she told KGW in an interview after the rally, “She’s the one who fighters for our democracy. Everyone gets the right to vote, and to get that vote counted.”

Ahead of the event, Kotek supporters voiced real concerns with Election Day around the corner.

“I feel like we’re at a critical time, and it’s very easy as Oregonians to assume that we have a blue state,” said Tracy Schlapp.