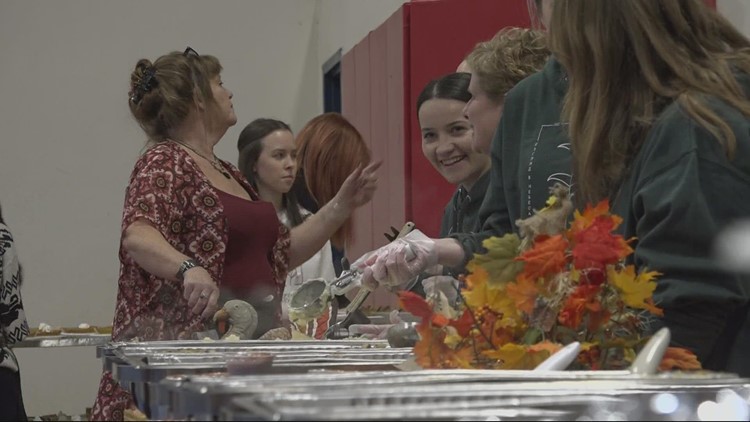 On Sunday, the Salvation Army Cascade Division prepared to serve a Thanksgiving meal for at least 300 people.

PORTLAND, Ore. — The Thanksgiving holiday came early for friends and families in North Portland this year. On Sunday afternoon, the Moore Street Corps Community Center was turned into a gathering place where the Salvation Army put on their annual Thanksgiving dinner for the community in need.

The dinner is meant for those who don’t have family to spend Thanksgiving with, or those who otherwise wouldn’t be able to celebrate the holiday.

“We even have the pumpkin pie, everything that is usually on a Thanksgiving table is here today,” said Lt. Omoduni George. “Today is all about bringing together community to have a Thanksgiving meal as a family.”

It’s a tradition the Salvation Army Cascade Division has been giving to the North Portland community for more than 10 years. Last year, they served 170 people. This year, they’re hoping for at least 300. Hundreds of volunteers spent weeks preparing.

“It makes a huge difference … we have people here who were here last year,” said George.

One couple celebrated not only Thanksgiving, but their four-year wedding anniversary.

It’s also a new tradition for Portlanders like Charles Wolfe, who lives on a fixed income and couldn’t afford to make his own Thanksgiving dinner this year.

“I’m pretty much destitute” Wolfe said. “Trying to cook a turkey and dressing and all that stuff in a wheelchair is pretty hard.”

For others like Matthew Harvey, it’s more than just the food.

“I lived on the street for a long time,” he said.

Harvey, who is coming up on one year of sobriety, gives back by volunteering with the Salvation Army — an organization he said saved his life.

“I just see what Portland needs more of. More love and more harmonious events where we can get together and give back,” Harvey said of the event Sunday.

RELATED: Hosting Thanksgiving? Here’s how to plan ahead