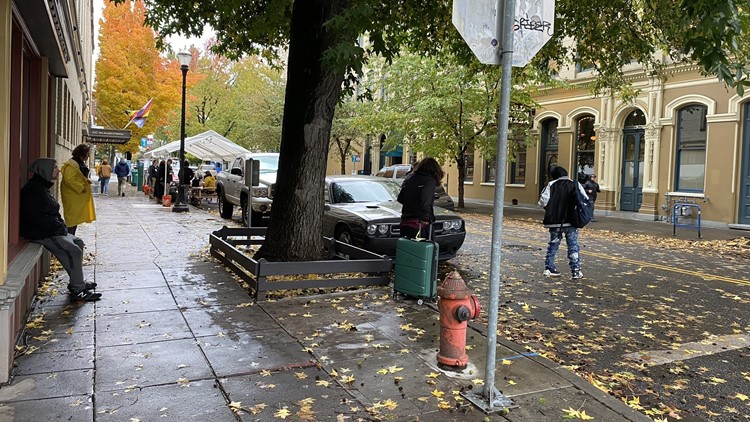 It’s hit or miss whether the majority of Portland’s homeless will vote, given the many obstacles they face.

PORTLAND, Ore. — Homelessness and housing have been a primary focus for both candidates and voters this election cycle. At the same time, the voices of those living on the streets often go unheard. With one day until election day, local nonprofits that work closely with the homeless are working to change that.

“We receive a lot of ballots during this time of the year,” said DeVon Pouncey, vendor program director for Street Roots. He and his team at Street Roots, a nonprofit that works with the homeless, have helped hundreds of homeless people navigate the voting process this year. They allow many homeless people to receive mail at their Old Town location and even helped them register to vote.

“Our unhoused neighbors just need to be able to have a voice,” Pouncey said.

HOMELESS VOTER TURNOUT | For many people living on the streets their voices are often unheard especially during election season.

Groups like @StreetRoots are helping them register and get their ballots in.

“Our unhoused neighbors just need to be able to have a voice.” pic.twitter.com/k1y5tiPadi

The Street Roots publication also put out an election series, informing homeless people of each candidate and what they stand for.

“They’re able to hear directly in our newspaper what the candidates’ plans are for the homeless community,” said Pouncey.

A homeless man who goes by the name of White Cloud escaped the rain outside of Street Roots on Monday morning. “I plan on voting in this election,” he said. “Right now, I’ve been looking over all the candidates and what they have to say.”

“That they’ll have a homeless solution that people will have places to live,” he said of the candidates for governor.

Other important topics for the homeless include access to healthcare and decriminalizing homelessness.

“Oftentimes their voices are intentionally diffused for a plethora of reasons, but it should never be that way — they’re community members just like the rest of us regardless of housing status,” added Pouncey.

RELATED: Commissioner Jo Ann Hardesty and challenger Rene Gonzalez face off over the future of Portland

However, there are still many homeless people who won’t vote due to not having a mailing address, or simply because they’ve decided against it.

A handful of those we talked with today in Old Town say they don’t plan on voting.

“I don’t vote,” said one woman who said she’s been homeless for 25 years. “I just hope that whoever is voting and whoever wins I hope they made their good judgment.”

“Probably wouldn’t even matter if I did vote, like one vote’s going to change the outcome,” said another man who has been homeless on and off for about seven years.

However, the outcome of this election could affect their future on the streets.

“It’s really important that people living on the streets vote because if they don’t vote it’s not going to benefit them,” said another man hanging out with a group of homeless people on the corner of Northwest 23rd and Davis.

Many people on the streets said they don’t prioritize voting — instead they’re focused on finding food and shelter. Others said they lost their ballot. People can request new ballots by filling out a form online or visiting their county elections office.

RELATED: Portland’s push to address homelessness could hang on the election for Multnomah County chair