Here's what's on the ballot for the November election in Oregon, SW Washington 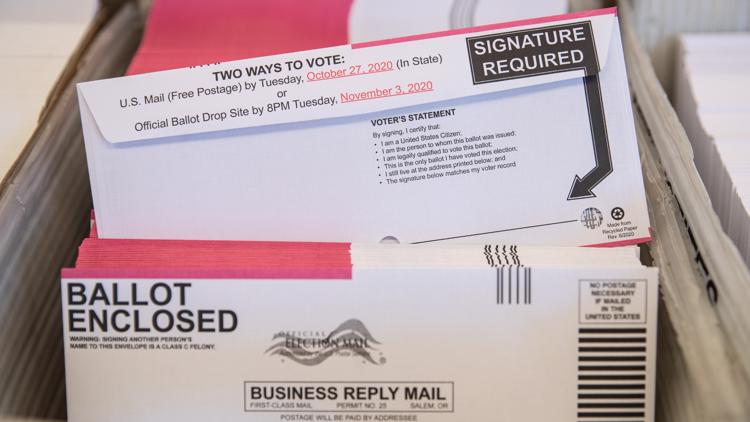 Here’s a look at the biggest races and measures Oregon, Portland and Southwest Washington voters can expect to find on their ballots for the Nov. 8 General Election. You can find up-to-date coverage at KGW’s main elections page, plus live results when election night arrives.

The deadline to register to vote in the current election was Tuesday, Oct. 18 for Oregon (Washington residents can still register up until Election Day), and ballots will start being mailed out Oct. 19. You can check the status of your ballot at the Oregon Secretary of State’s website.

Ballots are due by 8 p.m. on Election Day, Tuesday, Nov. 8, and can be mailed in or dropped off at any drop box location. Ballots received in the mail after Election Day will still be counted if they are postmarked on or before Election Day.

Here’s the rundown of the biggest races:


Federal races:
U.S. Senators and Representatives from Oregon and Washington

Oregon and Washington each have a single federal Senate seat on the ballot this year, and both races feature longtime incumbent Democrats facing off against Republican challengers. The U.S. House races are more of a shake-up. Thanks to a new district, a retirement and a primary election upset, half of Oregon’s six congressional districts will send new faces to DC next year no matter who wins.

The same goes for Washington’s 3rd Congressional District, where the ouster of Rep. Jaime Herrera Beutler in the primary sets up Southwest Washington voters with a choice between two political newcomers.

U.S. Sen. Patty Murray, a five-term incumbent Democrat, is facing Republican Tiffany Smiley in a runoff after the two of them finished first and second in Washington’s top-two primary in May.

Washington’s other U.S. senator, Maria Cantwell, was reelected in 2018, so her seat won’t be on the ballot again until 2024.

Democrat Val Hoyle, Republican Alek Skarlatos, Independent Levi Leatherberry and Pacific Green party candidate Mike Beilstein are vying to succeed Rep. Peter DeFazio, a Democrat, who is not running for reelection and will retire at the end of his current term.

Democrat Jamie McLeod-Skinner defeated seven-term incumbent and fellow Democrat Rep. Kurt Schrader in the May primary election, ousting him from the seat and setting up a November race between McLeod-Skinner and Republican Lori Chavez-DeRemer.

Democrat Andrea Salinas, Republican Mike Erickson and Constitution Party candidate Larry McFarland are facing off to determine who will become the first U.S. Representative for Oregon’s 6th Congressional District, which was newly created after the 2020 Census.

The biggest statewide race on the ballot is the three-way race for Oregon governor, but the nonpartisan Oregon Labor Commissioner race is also headed for a November runoff. Oregonians will also get to weigh in on a quartet of ballot measures that tackle some major policy areas: health care access, mandatory prison labor, legislative walkouts and gun control.

Democrat Tina Kotek, Republican Christine Drazan and unaffiliated candidate Betsy Johnson are facing off in what is essentially a three-way race to succeed Gov. Kate Brown, who is prevented by term limits from running again this year. Libertarian Party candidate R. Leon Noble and Constitution Party candidate Donice Smith are also on the ballot.

None of the candidates in the nonpartisan May primary election reached 50%, setting up a November runoff between first-place finisher Christina Stephenson and second-place finisher Cheri Helt.

The winner will succeed Val Hoyle, who opted to run for the U.S. House in Oregon’s 4th Congressional District rather than try for another term as labor commissioner.

Measure 111: Adds a right to health care to the state constitution

This is a measure referred to voters by the Oregon State Legislature that would amend the Oregon State Constitution to require the state to ensure affordable health care access “balanced against requirement to fund schools, other essential services.”

The latter clause means that if the state is sued to enforce the amendment, the courts cannot order the state to use money needed for schools or other basic services to fund the health care mandate, according to the ballot summary.

This is a measure referred to voters by the Oregon State Legislature that would amend the Oregon State Constitution by changing the language in Section 34 to make slavery and involuntary servitude illegal with no exceptions. The current language mirrors the 13th Amendment to the U.S. Constitution, which bans slavery and involuntary servitude but has a carve-out for mandatory prison labor.

In addition to removing the last vestige of legal slavery from the state constitution, the intent of the change is to make it so that prison work becomes strictly voluntary — although the measure’s summary states that it’s not clear what the change to the language would mean for Oregon’s current inmate work programs, which are separately mandated by Section 41 of the state constitution.

The measure would also add language that affirms the power of courts, probation officers and parole agencies to order a person convicted of a crime to attend education, counseling, treatment, or community service as an alternative to prison time if the programs “provide for accountability, reformation, protection of society, or rehabilitation.”

This measure is the result of an initiative petition and would amend the Oregon State Constitution so that state lawmakers with more than 10 unexcused absences during a single legislative session would be disqualified from holding office during the following session.

RELATED: Ballot measure aims to put a cap on legislative walkouts in Oregon

The measure aims to curtail the use of a legislative stall tactic in which the minority party’s members flee the Capitol en masse in order to keep overall attendance below the two-thirds level required by law for a quorum, preventing the majority from passing bills despite having enough votes to do so.

Both parties have used the tactic in Oregon in the past, although the four most recent instances – all in the past four years – involved a Republican minority walking out to block part of the Democratic majority’s agenda.

This measure is the result of an initiative petition and would change state law to introduce a permitting system for all firearm purchases. It would also ban large-capacity magazines, defined as holding more than 10 rounds of ammunition.

A permit would not be required to own a gun, but it would be required when purchasing a gun under any circumstances, including at gun shows and from private individuals.

Permits would be valid for five years and obtaining one would require the applicant to pass a background check and complete a safety course that covers topics like safe storage and basic handling.

The manufacture, sale, use or possession of a large-capacity magazine would become a Class A misdemeanor starting 180 days after passage of the measure. The measure includes exceptions for law enforcement and a grandfather clause for large magazines that a person already owns at the time the law takes effect.

The single biggest item on the ballot for Portland voters is the city’s charter reform package, which if passed would usher in a dramatic overhaul of the city’s government structure. There are also two big runoff elections, one for a Portland City Council seat and another for Multnomah County Commission Chair.

This measure would reshape Portland’s city government, switching from the oft-maligned commission format to a more common modern structure in which day-to-day operations are run by a professional city administrator who reports to the mayor, and the city council serves a purely policy-making role.

It would also expand the city council to 12 members (the mayor would no longer be one of them) and divide the city into four geographic districts of equal population, each of which would elect three council members in a single race through ranked-choice voting, a system known as single transferrable vote.

The measure was developed by the Charter Review Commission, which formed last year in accordance with Portland’s existing city charter, which requires a citizen commission to be convened every 10 years to evaluate the city’s government structure and present any recommended changes to voters.

If it passes, the transition process would begin in January with the appointment of an independent commission to draw the boundaries of the new districts, to be completed by September 2023. The first election under the new system would be in November 2024, with new city council members taking office in January 2025.

There were two Portland City Council seats on the ballot in the May primary, but incumbent Commissioner Dan Ryan finished first in the race for Position 2 with more than 50% of the vote, allowing him to claim victory outright.

Incumbent Commissioner Jo Ann Hardesty finished first in the race for Position 3 but fell short of the 50% total needed to win outright. She will face off against challenger Rene Gonzalez, who finished second in the primary.

The city council and mayoral terms are staggered; Mayor Ted Wheeler and Commissioners Mingus Mapps and Carmen Rubio were all elected in 2020 for terms that run through 2024.