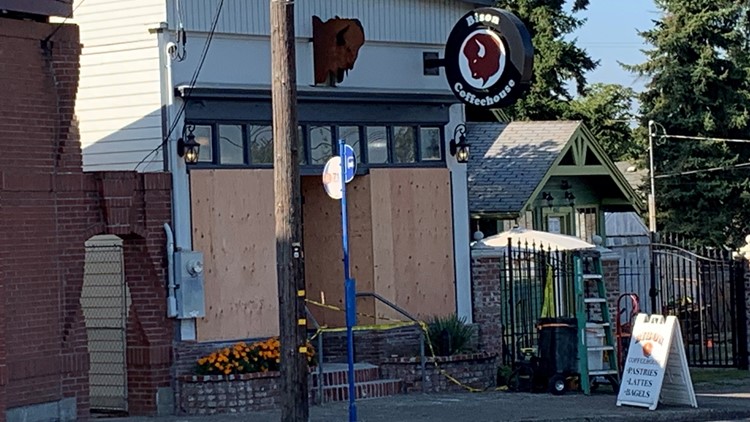 The owner of Bison Coffeehouse thinks she may have been targeted because she was planning to host a ‘Coffee with a Cop’ event on Wednesday.

The vandals can then be seen using a special piece of equipment to shoot spray paint into the coffee shop.

Owner Loretta Guzman rushed over to her business when she got the news.

Guzman was in disbelief. She cannot help but wonder if she was intentionally targeted because of the ‘coffee with a cop’ event she planned to host Wednesday morning.

“I’ve done these events in the past and they asked me if I was willing to host,” Guzman said. “Somewhere we have to make a change within our community. I’ve got kids and grandkids and we have to make it better for our future. That’s my belief, but it’s not everybody’s belief.”

OTHER STORIES: ‘It’s a loss’: Black-owned Portland dispensary vandalized, burglarized within a week

If anything gives her hope it is the number of people who came to the coffee shop to clean up the mess and board up windows, said Guzman.

State Rep. Tawna Sanchez was among the people who help with the clean up.

“People are resilient and they’ll come back and there are people in the world who need help to figure out why they’re doing things they’re doing,” Sanchez said.

Ultimately it will be up to police to figure out who did this and why.

“It saddens me that once again Portland will be the focus of something so negative and I’d like to highlight the positive coming out of this,” Commander Tina Jones said. “I’ve seen the community coming together and saying enough. This isn’t acceptable or what we’re about.”

Despite the vandalism, Guzman went ahead and hosted the ‘coffee with a cop event’ as planned.

Anyone with information about the case is urged to contact the Portland Police Bureau.