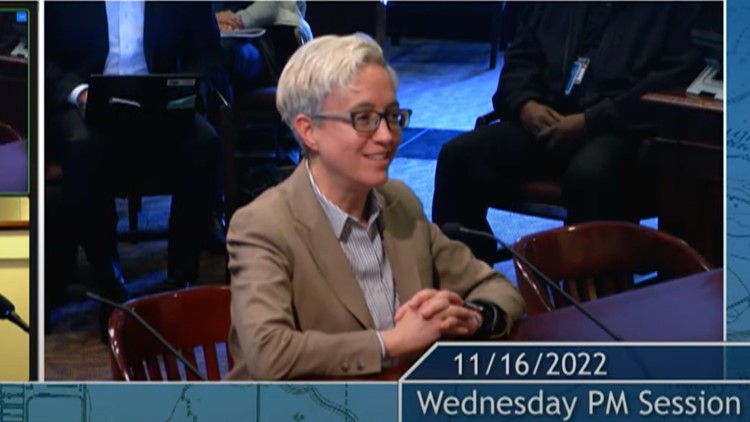 Portland Mayor Ted Wheeler said he and his staff met with Kotek ahead of the council meeting, and that he and Kotek would continue to meet every two weeks.

PORTLAND, Ore. — Presumptive Oregon Governor-Elect Tina Kotek made an unannounced visit to Portland City Hall Wednesday afternoon, briefly addressing the city council during its afternoon session and pledging to work with city leaders on issues like homelessness and economic recovery.

Portland Mayor Ted Wheeler introduced Kotek at the start of the afternoon session. Her visit wasn’t listed on the agenda, which focused solely on an ordinance about fossil fuel emission standards.

She spoke for about two minutes, touching on several of the major themes from her campaign including the housing crisis, addiction, mental health and education, and said she wanted to build a good working relationship with Portland leaders.

“I have heard across the state that people are concerned about things in Portland,” she said. “We have work to do, but we’re going to do it together.”

Kotek’s full remarks are included in the video player at the top of the story.

RELATED: Homelessness and housing in Oregon the first issue to tackle, Kotek says

Although Wheeler introduced her as the Governor-Elect, Kotek noted that it’s not yet her official title. The election results have not yet been certified, but Kotek is the projected winner and her opponent Christine Drazan conceded last week.

Kotek did, however, refer to herself as the Governor-Elect in a statement released a short time after her council appearance, and she confirmed Wheeler’s announcement that they would hold biweekly meetings.

RELATED: Kotek declares victory: ‘I promise to be a Governor for all of Oregon’

She said the two of them had discussed Wheeler’s latest push to address homelessness issues, which she said she “generally support(s) and will continue to follow closely as more detailed plans are developed.”

She said they also discussed the city’s next steps after she follows through on her plan to declare a homelessness state of emergency once she takes office, as well as Portland police staffing challenges and the need to revitalize downtown.