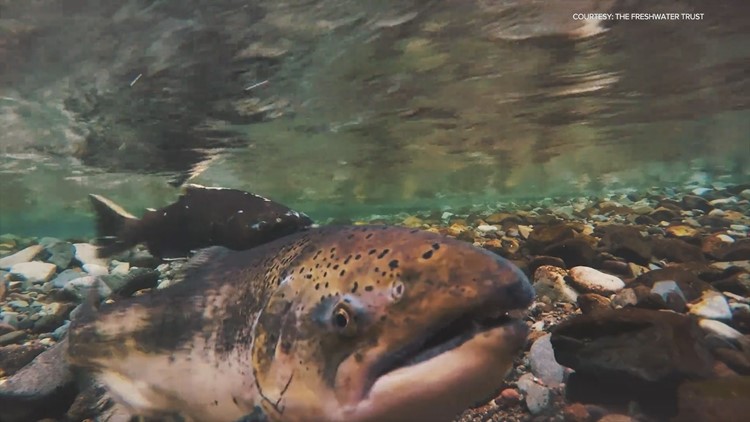 The native salmon population has more than tripled in the Sandy Basin, thanks to a decade of restoration by The Freshwater Trust.

PORTLAND, Ore. — Past flood management programs coupled with farming practices have made the impacts of climate change worse, speeding the decline of native salmon and steelhead. But victories are happening, like on the Salmon River, near Mount Hood.

“We’re really just trying to give the river a chance to fix itself and maintain a lot of those natural processes that have been damaged from decades of poor river management,” said Daniel Baldwin of the Freshwater Trust.

Baldwin and his team with the Freshwater Trust have spent the past decade creating safe, calm areas for endangered chinook and coho to lay their eggs.

“We’re putting wood in rivers and we’re putting channels back on flood plains and a lot of the structures that we’re putting in are meant to mimic what would be here naturally,” Baldwin said.

Adding natural debris and tree canopy cools, calms, and cleans stream flows in the Sandy River Basin. In the past decade, the population of adult coho has more than tripled.

“We’re really strong with using a data-driven approach to prioritize our restoration actions,” Baldwin said. Using what they call a quantified conservation approach, Freshwater Trust stretches every dollar it receives, using their own app to selectively target and monitor areas which can be helped the most with the least.

The trust was just awarded one of On Point Community Credit Union’s coveted Green Horizons grants.

“We support organizations that are focused on helping our environment,” said On Point’s Vanessa Valencia “We are making a $25,000 contribution so that they can continue all of their excellent work in protecting and restoring our freshwater ecosystems.”

“It also allows us to do our own research and to develop tools that can increase the pace and scale of this work,” he said.

RELATED: How to get paid to plant and care for your trees while helping the environment

RELATED: Balm Grove Dam along Gales Creek to be removed this summer