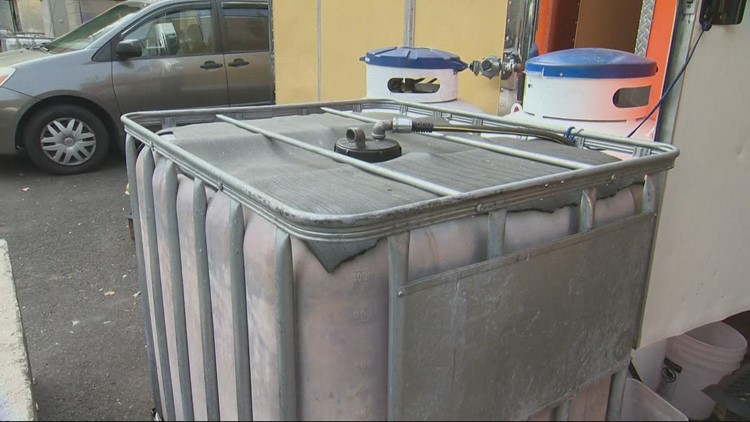 Starting in January food trucks in Multnomah County must be connected to a sewage line or have their wastewater pumped on a regular basis.

PORTLAND, Ore. — Portland food trucks are facing new rules when it comes to how they manage their water. Starting in January they must be connected to a sewage line or have their wastewater pumped on a regular basis. This change has been in the works for years but can cost owners a lot of money.

In 2019, the Oregon Health Authority implemented a new rule that food truck carts and pods can no longer store wastewater. This is an effort to cut down on spills which create health and safety risks.

“It’s more money for us that’s expensive we don’t need that,” said Shaymaa who works at Abu Omar on Southwest third and Harvey Milk.

They don’t have a sewage hookup and store the wastewater in a large cube which gets emptied each week for $80.

“This is the tank for water…we wash dishes, we wash everything so that’s for bad water,” Shaymaa explained.

“Sometimes we have a car back into a cube and the wastewater will just take over the entire parking lot,” said Jeff Martin who runs the county’s Environmental Health Department.

He said wastewater cubes were meant to be temporary, but in many cases they’ve become permanent.

“Wastewater that’s being generated from these mobile units are full of debris that can attract rodents when break do happen. They can get into storm water drains and affect the Willamette,” he said.

Food truck owners have until January first to either hook up to a sewage line or have their cubes emptied regularly. If not, they could face fines or get shut down.

“I just feel bad for the newbies because I’ve been doing this for 10 years, so I’ve had time to get all these systems and processes dialed in,” said the owner of Garden Monsters on Northeast Alberta Street.

“Fortunately, we’re directly connected to the city systems both for grey water and fresh water, so we don’t have to deal with that,” he said.

“We tried to look for someplace that did have sewage because we knew how difficult it was,” added Brenda Flores who owns Mole Mole also on Northeast Alberta Street.

However, many other food trucks aren’t so lucky.

“There’s some frustrations with this and that’s why we’ve been working on this for the last three years and really trying to notify everybody,” said Martin.

The deadline for these new sewage rules is January first. If customers see food trucks that aren’t in compliance, they should contact the county’s Environmental Health Department.