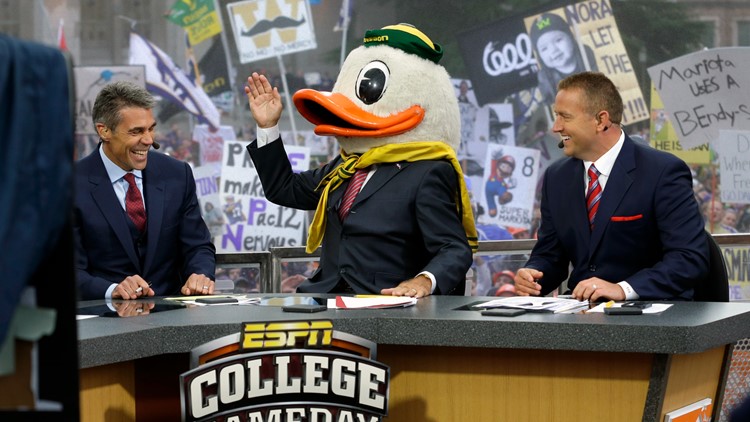 EUGENE, Ore. — For the first time since 2018, ESPN College GameDay will be live from Eugene for a Top-10 matchup between Oregon and UCLA.

The last time the popular, long-running college football show came to Autzen Stadium was Sept. 22, 2018 for a matchup between No. 20 Oregon and No. 7 Stanford. Justin Herbert threw for 346 yards and CJ Verdell ran for 115 yards in the game, but the Cardinal rallied to win, 38-31.

College GameDay will broadcast live from Memorial Quad on the University of Oregon campus from 6 a.m. to 9 a.m. Pacific on Saturday. Kickoff is set for 12:30 p.m.

UCLA, led by Chip Kelly, is ranked No. 9 and will venture to Autzen Stadium to take on Dan Lanning’s 10th-ranked Ducks. Those coaches are at different places in their respective tenures but are in similar spots this week.

On today’s episode of Locked On Ducks, Spencer McLaughlin breaks down the big news following Oregon’s bye week last weekend and what it means to have all eyes on Autzen Stadium this Saturday.

Plus, a quick check in on a couple of former Ducks who shined in the NFL on Sunday afternoon, including Marcus Mariota.

One listener wants to know which team should scare Oregon more: USC or Utah, who played one of the best college football games in the Pac-12 this season on Saturday.

Plus, a question about recruiting “what-ifs” from the past few seasons as the Ducks’ recruiting prowess has soared to new heights.