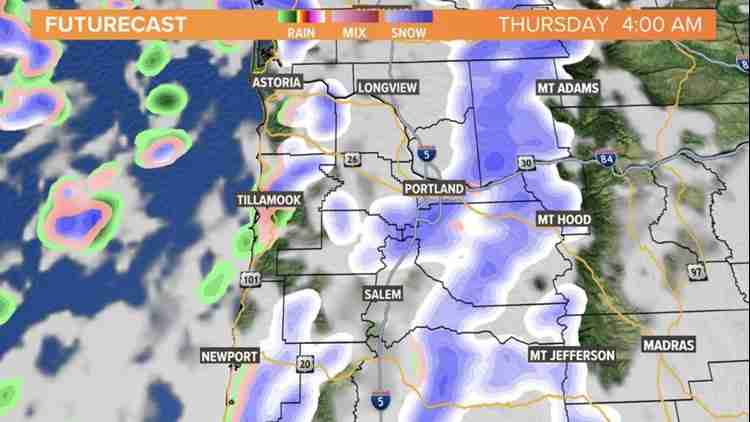 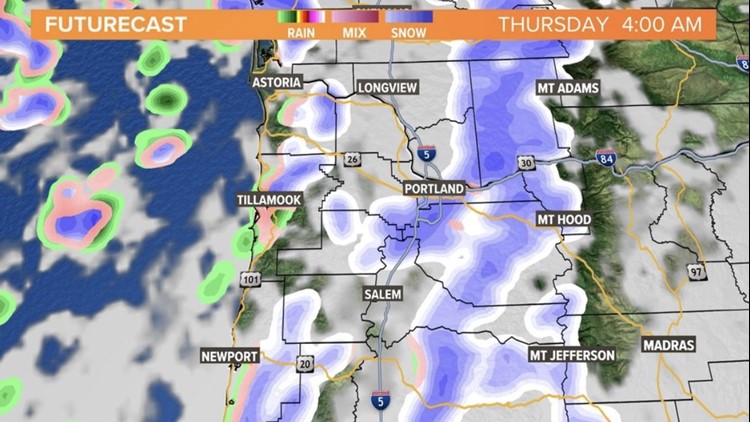 The forecast calls for scattered light snow showers anywhere from a dusting to one inch of snow by late Thursday morning from Eugene to the Portland, Vancouver area.

PORTLAND, Ore. — Since Sunday, the Oregon Cascades, parts of the Columbia River Gorge and eastern Oregon have gotten enough snow to cause traffic slowdowns and road closures. Thus far, the weather hasn’t had much of an impact on the I-5 corridor, but that could change early Thursday morning.

Snow levels are expected to drop enough overnight to reach the Portland metro and Salem areas, though it’s unclear whether there will be enough snow to impact morning commutes.

You can check current traffic conditions on the Oregon Department of Transportation’s TripCheck map. In the meantime, here’s a timeline of what you can expect.

Scattered showers through Wednesday night are expected to become snow after midnight, according to KGW meteorologist Rod Hill, as weather activity moves across the Willamette Valley and southwest Washington.

Low temperatures into Thursday morning will range from 28 to 35 degrees stretching from Longview down to Albany.

Forecast models show snow showers passing through the I-5 corridor at 4 a.m. Thursday. What we don’t know yet is whether the snow showers will be heavy enough to leave snow on the ground in some areas, or if it will just be passing flurries.

The National Weather Service said that it expects anywhere from a light dusting to an inch of snow in the lowlands stretching from Portland and Vancouver down to Eugene by late Thursday morning.

Weather models show downtown Portland near 32 degrees or slightly above. Hill said that all areas are likely at risk of flurries up to a dusting of snow.

Attention morning commuters! It is looking increasingly likely that scattered light snow showers will impact the lowlands Thursday morning. Model guidance is now suggesting anywhere from a dusting to one inch of snow by late Thursday morning from Eugene to Portland/Vancouver. pic.twitter.com/PfUJxqPhB8

Daytime temperatures on Thursday will warm only into the low 40s by the afternoon, with a mix of daytime rain and snow showers expected. That wintry mix will likely continue through the night.

According to the NWS, snow levels are expected to rise back up to 1700 feet by Friday afternoon, taking snow out of the lowlands for the rest of the week. However, rain showers will continue through Saturday, particularly overnight and during the morning hours.