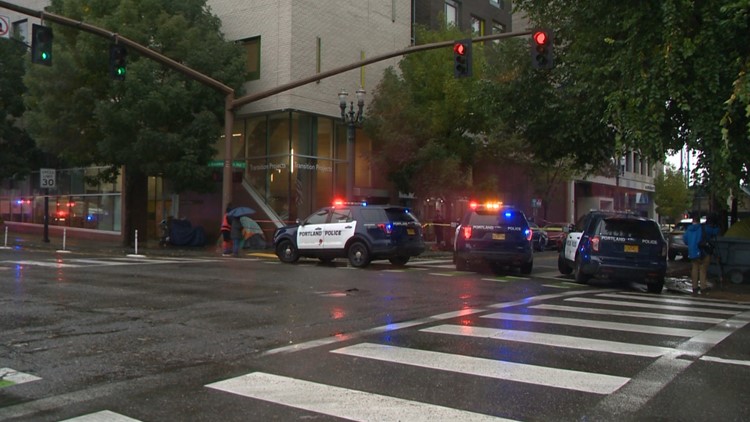 Portland police said that officers had tried to “box in” a stolen Jeep with two people passed out inside, but the driver woke up and managed to escape.

PORTLAND, Ore. — Portland police said that two people were hurt downtown on Friday afternoon when the driver of a stolen Jeep swerved up onto a curb to escape officers.

According to the agency, two officers found a stolen vehicle near the intersection of NW Hoyt Street and NW Broadway around 3:30 p.m. Inside were two people, both passed out.

The vehicle was a black 2015 Jeep Grand Cherokee with no license plates, the VIN number proved that it had been stolen from the area of SW 6th Avenue and SW Clay Street six days earlier, police said.

Because stolen vehicle calls like this often end with the suspects fleeing, Portland Police Bureau spokesman Sgt. Kevin Allen said, the officers moved their vehicles to box in the Jeep. The maneuver proved ineffective.

When the driver of the Jeep woke up, police said that he threw the vehicle in gear and started pushing the PPB vehicle in front, moving it just enough to escape.

The Jeep driver allegedly went up onto a curb and promptly drove through an occupied tent on the sidewalk. The suspect kept going along the sidewalk, nearly hitting other people.

Two people who were inside the tent were injured when the suspect hit it, PPB said. One was treated at the scene, but police said that a 16-year-old girl was taken to the hospital in an ambulance with serious injuries. She was conscious and talking to officers, and her injuries are not believed to be life-threatening.

Police were not immediately able to stop the suspects and traffic officers responded to investigate the scene as a hit-and-run crash, closing down the intersection of NW Hoyt and NW Broadway.

Despite finding the stolen Jeep, PPB said that detectives later figured out that the driver — identified as 53-year-old Michael Godfrey — was not the same person who drove away from officers earlier in the day and injured two people. Police are still looking for that person, who has not been identified.

Godfrey was booked into jail for unauthorized use of a motor vehicle, possession of a stolen vehicle and attempting to elude police. The passenger, identified as 47-year-old Rafiki D. Magano, was booked for being a felon in possession of a firearm.