Drazan and Kotek were in a close race for Oregon governor. Did the final debate change things? 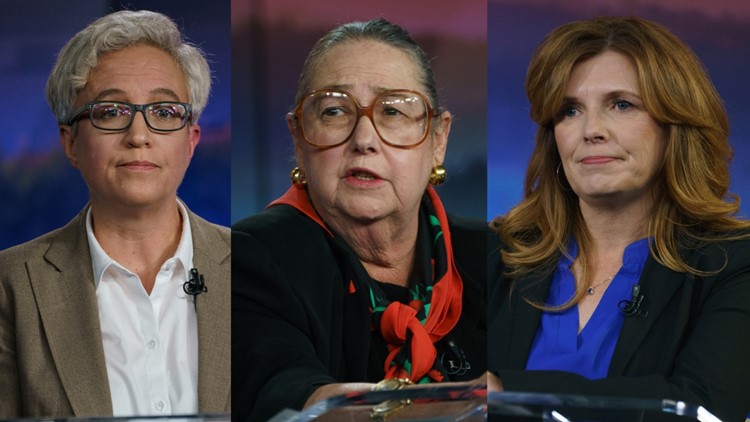 Polls show a tight race between Republican Christine Drazan and Democrat Tina Kotek, but a sizable number of people remained undecided in the last round of polling.

The candidates had an hour to tackle some of the biggest issues facing Oregonians: homelessness, mental health, addiction services, abortion rights, education and campaign funding, among others.

But will the debate move the needle at all before voters start sending in their ballots?

“The stakes are really high, in part because there’s a large number of undecided voters in Oregon,” said Christopher Stout, associate professor of political science at Oregon State University. “I think in almost any election, people have already decided who they’re going to vote for. But in this case, because we have three really qualified candidates, a lot of voters are trying to make their final decision.”

The three-way debate, Stout said, offered candidates a chance to persuade — more so than in a traditional two-party debate.

“In this particular election, I think just the dynamics of having three candidates and three choices makes this debate more meaningful than if it’s just a Democrat or Republican,” Stout continued.

Each of the candidates were asked for their take on how best to respond to homelessness. According to Stout, Drazan’s answer separated her from the typical “tough on crime” stance of many Republicans.

“I think Christine Drazan set the tone really, really early on that she was going to go after independent voters,” Stout said. “Her response was that we need to show compassion and understand what they’re going through. This kind of hearkens back to an idea of a ‘compassionate conservative’ that we saw in the early 2000s with George W. Bush.”

Stout also said that the three-party race also set the tenor for mudslinging during the debate. Kotek in particular endured criticism from both Johnson and Drazan, while the latter two had fewer areas of contention.

“I think one of the things that was surprising, and this is different from, I think, most debates between two-party candidates is in that case you have two candidates vying for the the same voters,” Stout said. “So I think Betsy Johnson wants to siphon off voters from Tina Kotek and Christine Drazen wants to make Kotek seem (like she’s) not the best choice … and so it kind of seemed at points that it was kind of a two-on-one. Tina Kotek was receiving a lot more criticism than you would have when there’s just two credible candidates running for office.”

It was surprising to Stout, too, that Kotek at several points worked to distance herself from Gov. Kate Brown.

“You would assume that a Democrat would work closely with the another Democrat, but because Kate Brown is unpopular and because people are unhappy with the conditions Oregon and where things are going,” Stout said, “kind of demonstrating independence from the incumbent and saying, ‘I’ll be a change of pace rather than more of the same.'”

In Stout’s assessment, there wasn’t a clear winner in Wednesday night’s debate. None of the candidates made a fatal gaffe or let slip a sound bite that could be used against them, at least not that they didn’t intend. Regardless, he said, the debate may have encouraged some undecided voters to solidify their choice.

“Yeah, I think there’s a lot of voters that could have been swayed,” he said. “If we’re looking at public opinion polls, even nationally … there’s a lot of voters who were going to vote for one party in the summer and now voting for a different party. And I think last night could be effective in changing maybe one or two or three percent of voters.”

Two new polls on the race for Oregon governor demonstrate just how tight the race is, and how variable voters are feeling less than three weeks away from Election Day.

Even in Hoffman’s poll, the race is a toss-up. Drazan leads with 37%, followed by Kotek with 35% support. Johnson polled below 20%, and Hoffman noted that about 12% of people polled were still undecided.

The poll included 700 randomly selected “likely voters” in Oregon, surveyed over the phone earlier this week. Hoffman said there was a margin of error of 3.8%, meaning that Kotek and Drazan might as well be in a dead heat.

A second survey came from online polling company Civiqs, yielding some surprising results compared to other recent polls. This poll had Kotek with an eight-point lead, at 47%, followed by Drazan at 39% and Johnson with just 7%.

The Civiqs poll did not have an “undecided” option. It surveyed just over 800 likely voters in Oregon between this past Saturday and Tuesday. The margin of error was listed at 4.3%.

Both Hoffman and Civiqs have a somewhat below average efficacy grade from polling aggregator FiveThirtyEight, with the former tending to underestimate Democrats’ chances in past elections and the latter tending to overestimate.

Using FiveThirtyEight’s own average of all the polls — attempting to account for each survey’s quality, recency, sample size and partisan lean — Drazan holds the slightest of leads over Kotek, less than half a percent.

In recent days, based on that polling, Johnson’s support has fallen while Kotek’s has grown, suggesting that Johnson supporters have jumped ship in favor of Kotek.

During Wednesday night’s debate, Johnson said that she doesn’t put much weight in polling.

“I believe that sports odds-makers don’t win games,” Johnson said. “I’m in this race until the absolute end.”

RELATED: How can poll results for the Oregon governor’s race be so different?

The 2022 race to replace Kate Brown as governor is already the most expensive in Oregon history, with around $55 million spent thus far. KGW has been checking in on campaign finances to see what’s going on behind the scenes, and the landscape has changed in a matter of days.

As of Thursday, Kotek has more money available to spend than the other campaigns combined, with more than $3.1 million. That’s around $400,000 more than just two days ago.

Johnson’s coffers come in second, with $1.3 million. Her campaign has been on a spending spree, using up more than $700,000 since Tuesday.

Drazan’s campaign has just over $1 million ready to spend, having seen an increase of about $200,000 within the past 48 hours.

So where is the money coming from? Or, in Johnson’s case, where is it going?

Kotek’s latest campaign activity shows a lot of money coming from out-of-state donors, although the individual transactions don’t represent huge sums of money. It’s a similar story for Drazan — there are lines upon lines of $300 donations, most coming from LLCs and most from outside of Oregon.

As for Johnson’s spending, we simply don’t know yet. Her campaign finance records aren’t as up-to-date as her two opponents, with the most recent activity appearing on Oct. 12. Those records must be posted publicly, but campaigns are allowed some leeway on the timing.