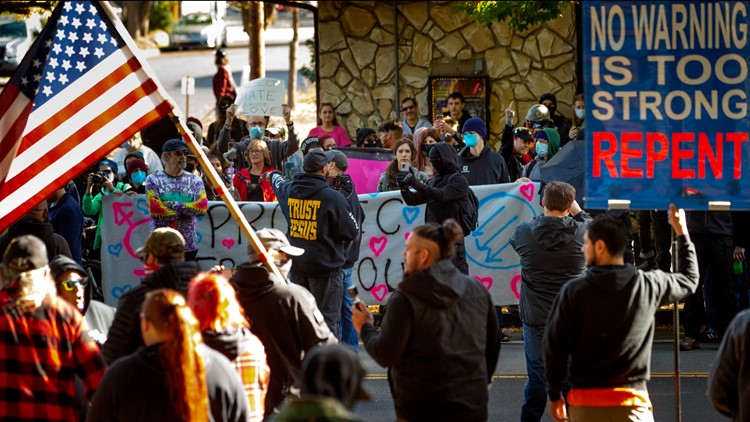 The tense protest made the pub in Eugene the latest target of anti-LGBTQ rhetoric that’s increasingly targeting drag story time events around the U.S.

EUGENE, Ore. — Protesters, some of them armed, threw rocks and smoke grenades at each other outside a drag queen story time event at an Oregon pub, but the weekend show that was to have featured a child performer went on as planned.

The 11-year-old did not take part as scheduled but was in the audience of about 50 people as some 200 demonstrators and counterdemonstrators — some of them armed — faced off outside the Oregon pub where Sunday’s story time was held.

Authorities said people in the crowd of about 200 protesters on both sides briefly “lobbed projectiles” at each other, prompting authorities to shut down the street. Some in the crowd had semi-automatic rifles, police said. The projectiles were rocks and some smoke bombs, the Register Guard reported.

Police did not make any arrests and said one person was taken to the hospital by ambulance with an unspecified injury.

The tense protest made the pub in Eugene, about 110 miles south of Portland, the latest target of anti-LGBTQ rhetoric that’s increasingly targeting drag story time events around the U.S.

The Drag Queen Story Hour, a national project conceived as a means to educate and entertain children by appealing to their imaginations, has generated social media backlash from opponents who claim they want to protect children. Organizers said the protests were actually frightening and endangering participants and they vowed to enhance security at the events but not halt their programs.

The pub said Monday in a Facebook post that the event went on safely despite the protests, but the business expects to be “a target for violent extremists for a good while” and said it spent $2,000 on private security Sunday.

The pub’s staff had “an intense weekend filled with racist and homophobic hate mail, physical threats of violence, and repeated attacks by right wing media outlets framing our Drag Queen Storytime as nefarious.”

“We love you all so much, and we will not ever back down to hate,” the pub said in its Monday post. It added, “Thank you for standing with us against this growing trend of violence against queer youth and LGBTQ venues.”

The pub frequently holds LGBTQ-friendly events and had promoted the show as a story time featuring drag performers singing songs and reading picture books, with plans to include the 11-year-old performer.

Inside the pub, the child who had been expected to perform instead became the show’s guest of honor as several adult drag queens sang and read picture books before an audience that included families with small children.

An advertisement for the event had featured a rainbow, a unicorn and puffy clouds against a blue sky along with superimposed photos of the child performer and three adult drag queens.

The 11-year-old, who goes by the stage name Vanellope, has performed at the eatery and live music venue before with little fanfare. Videos posted on the pub’s Facebook page shows her dancing and singing in a poofy white and blue dress while families with small children watch and dance along.

Tension over the show had been brewing all week after right-wing personalities learned of it and posted about it online.

The nonprofit Drag Queen Story Hour was started in San Francisco in 2015 by activist and author Michelle Tea. Chapters have since opened across the U.S. and elsewhere. Other organizations with readers in drag have also formed.

As part of Drag Queen Story Hour’s programming, drag queens read to children and their parents at libraries, bookstores, fairs, parks and other public spaces to celebrate reading “through the glamorous art of drag.”

Other drag events have also been in the headlines lately. Most recently, a half-hour “Drag Kids” program planned for the Boise Pride Festival generated national backlash and anonymous threats. Festival organizers envisioned a short performance where kids could put on sparkly dresses and lip-sync to songs like Kelly Clarkson’s “People Like Us” on stage. But organizers ultimately pulled the program from the festival due to safety concerns.

RELATED: Corvallis author calls her new children’s book ‘The Meaning of Pride’ an ode to representation