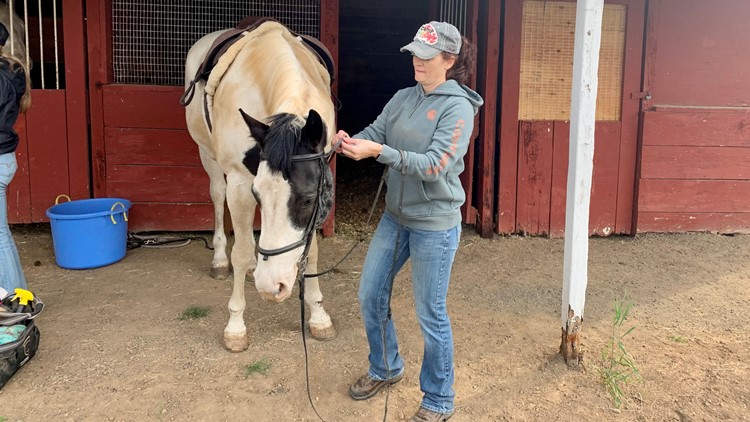 The space opened as a shelter in response to evacuation orders from the Nakia Creek Fire burning north of Camas.

RIDGEFIELD, Wash. — The Nakia Creek Fire is impacting rural landowners with livestock and big animals as they evacuate to safety. There’s a shelter set up for horses at the Clark County Fairgrounds in Ridgefield.

Kellian Whidden is the manager of Green Mountain Stables out in the Fern Prairie area of Vancouver. The boarding facility is on the edge of the fire and Sunday afternoon she got a notification to get out as the fire broke containment lines and grew.

“We were called and said ‘Go now’ and literally three seconds later, they called us back again and said ‘You need to get out immediately,'” said Whidden. She did everything right. She made a plan when the fire first broke out about a week ago but didn’t realize the plan would have to be executed on such short notice. Whidden ended up moving 28 of her horses in an hour and a half.

She had hay and grains ready to go and gathered the horses to head for a safer place.

“I have one that’s 38 years old, he hadn’t been in a trailer in 10 years,” said Whidden. “He has really bad eyesight and trusted me enough to get in a trailer.”

They found refuge at the Clark County Fairgrounds. Marie Powers, a volunteer at the shelter said they currently have 60 horses from five different farms and are expecting more.

“We are working to try to keep the fairgrounds open particularly to large barns, that are in need of housing mass numbers of horses,” said Powers, who also had a piece of advice for people still under Level 1 “Be Ready” evacuation notices.

“Don’t wait to make your plan, make it now so when you hit Level 2 or 3 you’re prepared and you’re less panicked,” she said.

She’s very grateful to have found enough space at the fairgrounds— a safe place for herself and her best friends.

The shelter is only opened to horses but they’re trying to house other livestock in area farms. To contact the Executive Horse Council, call 360-607-2535 before bringing your horses at the fairgrounds.