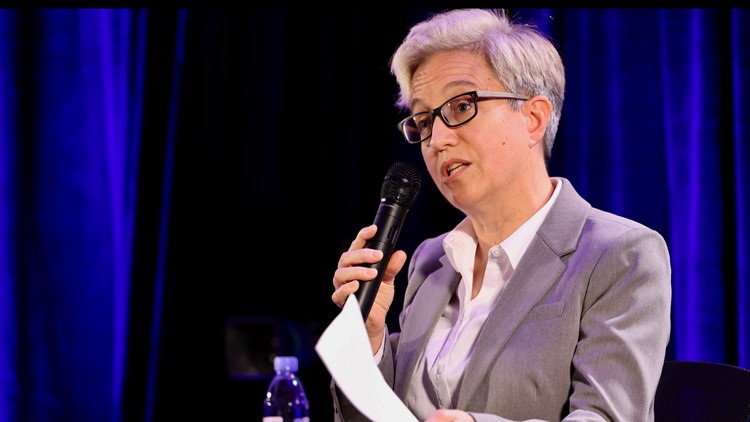 KGW is sitting down with each gubernatorial candidate to hear their stance on the state’s homeless crisis.

KGW is sitting down with each gubernatorial candidate to hear their stance on the homelessness and housing crisis, which polls also show is a top issue for Oregon voters heading into November. We started with Drazan and Johnson last week, and now continue with Kotek.

Here is the interview between KGW reporter Blair Best and Tina Kotek, lightly edited for length and clarity. A couple of Kotek’s answers have been summarized or appended with additional context, and those sections are noted in italics. The full interview can also be viewed at the bottom.

Best: How would you describe the state of Oregon’s streets right now?

Best: If elected you say you’ll end homelessness for veterans, families with children, young adults, people 65 and older by 2025. How do you plan to do that?

Kotek: I really appreciate you taking a look at my plan. I’m the only candidate that has that level of detail on my website. The reason I started with those populations of folks living on the streets is that you got to start somewhere and focus on communities where there are resources, so we have resources to help our veterans. When families and kids are living on the street— that affects the entire trajectory of the family and the educational success of those children. When young people come out of foster care that’s our responsibility, they should not be homeless, there should be a pathway for them to be housed…We need to see progress so I believe we can make progress in the first six months, in the first year to help more people get into housing.

She talked about using a whole continuum of services, including more outreach teams working with those experiencing homelessness to connect them with resources.

Kotek: Because that connection is really important say ‘You’ve been on the streets. We’re here to help.’ What do you need? Mental health and addiction services? Here you go. Do you need to get into a transitional shelter like a converted motel room? Here you go, and you need permanent housing— we need to continue to build more housing but also get people into what housing is already here.

Best: Will you continue to allow camping on the sidewalks?

Kotek: I think the city has taken the right approach for restricting certain areas for safety and health reasons where people should not be camping outside. Until we have enough shelter space there will have to be some folks outside. Now what I would say is how do we make those cleaner. Living in a tent doesn’t mean you have to live in trash.

Best: Do you have a plan on how you will handle the homeless population who wants to stay in their RV or tent as opposed to go into shelter?

Kotek: I believe that when people get connected to someone they can trust and know that there’s a way out of where they’re living— the vast majority of people will say ‘I want to get off the streets, I don’t want to be living this way’ when we have shelter and services more available, those folks are going to have to get off the streets.

Best: Do you have a plan on how you’ll address this rinse-and-repeat cycle that we see when camps get cleared, people go into shelter but then move onto another sidewalk to another neighborhood?

Kotek: Yeah, I’m really disappointed about the connection of services when people are being moved because of health and safety reasons. We’re not providing that pathway. Honestly, I think locally we have failed to provide more safe rest villages has been the issue. Where are they? I put money out there for there to be an RV park. Where is that RV park?

Best: A lot of people see this issue as a city-specific issue. What will you do at the state level to make a difference on our streets say here in Portland?

Kotek: Such a good question. This is a statewide issue. We’re obviously dealing with, and it feels very intense in Portland. Couple things. You know more than three years or almost three years ago, I called for a homelessness state of emergency at the state level…And unfortunately, what happened is that session shut down because Christine Drazan walked out of the session, holding the state hostage, and that work didn’t happen. We missed an entire year of what we could have been doing differently because of that walk out and now we’re paying the price for it. We’re trying to catch up.

Best: How do you think another state of emergency will really make a difference?

Kotek: I think when you issue that state of emergency, it says ‘We have a crisis, we need urgency.’ It sends a message to state agencies that it’s not business as usual.

Best: Is there anything that you learned as speaker of the house that you would do differently if elected as governor to address this crisis?

Kotek: I think maybe just assuming agencies can do this work without more accountability. As the speaker of the house, when you pass budgets and pass bills, you assume the executive branch is going to do their job. Well they didn’t, and as governor I’m going to make sure that agency leadership understands the urgency here, doesn’t go back to business as usual and actually gets the outcomes that we need to see.

Best: You’re the only candidate who says they won’t work to repeal Measure 110. In a debate in bend, I believe you said something along the lines of ‘we can chew gum and walk at the same time’ when it comes to addressing the drug crisis and getting people into treatment. Can you explain your approach to Measure 110?

Kotek: Yes, thank you for the question. Well, voters said we have to do something different. Voters understand we have an addiction epidemic in our state, and they said it’s more effective to get people healthcare and into services instead of having them just cycle through jail. My job as governor is to make sure that we fulfill that promise that voters have asked us to do.

Best: So, you don’t think Measure 110 is working right now?

Kotek: I think it’s not where it needs to be but throwing it out and saying start over is not the answer. Let’s follow through with what voters told us to do and make it work. My job is to make it work and that’s what I’m planning to do.

Best: A lot of people and both of your opponents say some of your policies in the past haven’t helped this crisis…. A lot of them say you’re for tent cities and that you’re for people camping on the sidewalks and you’re not going to change that.

Kotek: Well, I know what they’re saying it’s just, it’s just wrong. When the courts said it’s unconstitutional to jail somebody just for being homeless, we have to live by what the courts say. What I think the cities and counties can do is be very specific about where people can and cannot be, and for the folks that are on the streets getting them connected to services. I don’t want people living on the streets, I’m not approving of any of this.

Best: You say Oregon needs to build 36,200 new homes each year for the next ten years to meet the need for people experiencing homelessness. How do you plan to do that given how long it takes for some of these building projects to be completed?

Kotek: I am so glad you read my plan. Yes, we have to build more housing. So, as you see in my plan, on day one we’re going to bring people together to say ‘OK this is a multi-issue, we need a workforce that can build the housing.’…We have to work with the folks who build the homes and say how do we make it easier for you, how do we make the permitting easier, how do we do the upfront money so you can get projects started.

Best: Where will the money come from for all these ideas?

Kotek: Well, that’s a good question. In terms of housing, I’m hoping to come into the most available legislative session probably in 2024 to talk about more money for housing but you have to realize we are spending hundreds of millions of dollars at the state right now to build affordable housing and frankly it’s just taking too long. So sitting down with the money we do have, making it more effective.

Best: How do you ensure that your plans will not just remain conceptual?

Kotek: Plans have to actually make stuff happen I think Oregon is really good at spending a lot of time and a lot of recommendations and they sit on the shelf. I read reports and say well you say we should do this, let’s do this— because people need us to make things happen.

Best: If homelessness is someone’s top concern, why should they vote for you?

Kotek: I understand how to solve this problem. I have a plan. The other ones are just talking and making political statements. I’m not about the politics. This is about serving people. It is unsafe for people to be on the streets and if you’re living right next to someone in a tent, also unsafe for you. None of us want this. I am committed. It’s about solving this problem and I have the experience and frankly the toughness to get it done.