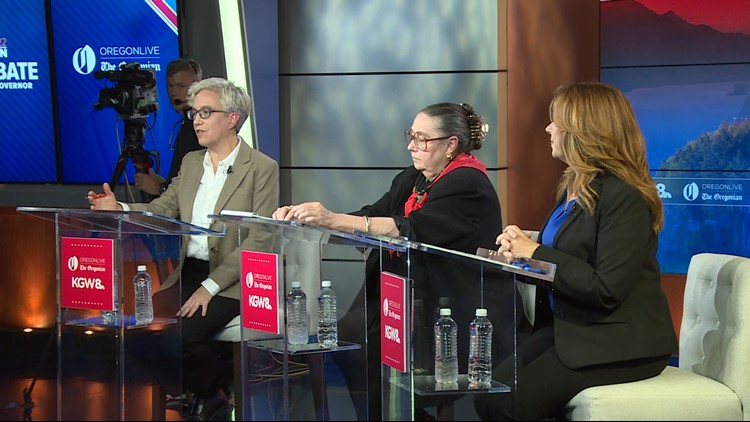 Johnson’s presence in the race has made it possible for a Republican, Drazan, to potentially take the office of Oregon governor for the first time in decades.

PORTLAND, Ore. — The three candidates for Oregon governor appeared on KGW Wednesday night for the fourth and final televised debate ahead of the November election. They were each asked to weigh in on major issues in the state, including homelessness, mental health and addiction services, education and abortion.

For decades, Democrats have had an advantage in running for statewide office. But recent polling suggests that this race for governor may be the most competitive in some time — due in large part to the well-funded unaffiliated campaign of Betsy Johnson.

Democrat Tina Kotek, former speaker of the Oregon House of Representatives, faced frequent attacks during Wednesday night’s debate from each of her opponents, both of them former state legislators. Johnson was a state senator before stepping down to explore her bid for governor. Republican Christine Drazan formerly served as House minority leader.

Johnson and Drazan were frequently in agreement on the issues, criticizing Kotek for her comparatively progressive policies, her response to the 2020 racial justice protests in Portland following the murder of George Floyd and her work on homelessness in the legislature.

“It was Tina pushing through a bill that facilitated and enabled sidewalk camping,” Johnson said during her response to a prompt on homelessness in Portland.

“(Portland) has the ability now to enforce time, place and manner — to move tents off city sidewalks that are unsafe and unhealthy,” Kotek shot back. “And they’re doing that, and I support that, they need to do more of that. Senator Johnson knows that that’s not what that legislation did.”

The bill in question, passed by the legislature in June of 2021, aligned Oregon law with an influential court ruling, Martin v. City of Boise, in which the 9th Circuit Court of Appeals found that a municipality’s “time, place and manner” restrictions for sleeping on public property must be reasonable. A full ban on sleeping outdoors, for example, would be considered unreasonable if the city in question did not have adequate shelter space available.

A subsequent case in Oregon, Blake v. City of Grants Pass, came to a similar conclusion as Martin. Neither the rulings nor the bill have stopped cities like Medford from widely banning tent camping, while allowing overnight sleeping on public property in most areas.

Kotek worked during the debate to distinguish herself from Governor Kate Brown, highlighting areas in which she disagreed with the outgoing executive or criticized her leadership. She blamed both Brown and Drazan for failing to act on homelessness — the former by not declaring an emergency, the latter by leading her House Republican colleagues in a legislative walk-out that killed multiple bills when the 2020 legislative session ended in acrimony.

Rather than trying to pin Kotek to Brown’s legacy, both Drazan and Johnson worked to poke holes in the former speaker’s record in the legislature.

“The assertion that the Speaker of the House, that’s had responsibility for this challenge for over a decade, would hand responsibility to the House Republican Leader — you know, it’s a little bit flattering, but it’s really really off base,” Drazan said. “The reality of the situation is that (Kotek) prioritized almost everything before she prioritized homelessness.”

RELATED: Responding to Portland’s homeless crisis through the eyes of a Portland police sergeant

In response to a prompt regarding law enforcement staffing shortages, both Drazan and Johnson pounced on Kotek, with Drazan calling her “the original ‘defund the police’ candidate” and attempting to tie Kotek to the 2020 racial justice protests in Portland.

Mayor Wheeler attended a downtown Portland protest in July of 2020 and was enveloped in tear gas deployed by federal law enforcement along with the rest of the crowd. Kotek’s letter, written a few weeks earlier, criticized Wheeler — Portland’s police commissioner — for officers’ liberal use of tear gas and other riot munitions on protesters.

Johnson pointed to the recent vandalism at a Northeast Portland business, Bison Coffeehouse, seemingly perpetrated by a group in response to a “Coffee with a Cop” event scheduled for the next day — calling it the result of a “culture of lawlessness” facilitated by Kotek and Governor Kate Brown.

“They’re both misrepresenting my record,” Kotek said. “I do support law enforcement — I’ve actually been to the Bison Coffeehouse, it’s unacceptable what happened at that small business. It is essential that when someone calls 911, they get the right response. I also think it’s important to hold law enforcement accountable — you can do both.”

Despite the sparring Wednesday night, there were areas where all of the candidates largely agreed. They all supported declaring an emergency for homelessness, all criticized the rollout of Measure 110 and all supported increasing access to mental health and addiction recovery services. However, their preferred methods and emphasis differed.

On Measure 110, Johnson supported having voters reconsider — seeming to support a modified version of the law that does not include drug decriminalization. Kotek did not support changing the law, but said that the state needed to do more in order to make it effective. Drazan wanted the law repealed.

According to a DHM Research poll commissioned by The Oregonian last month, Drazan held a slight lead in the race with 32% support, followed closely by Kotek with 31%. Johnson lagged well behind with 18% support.

When asked during the debate Wednesday, Johnson said emphatically that she had no intentions of dropping out of the race and she did not consider herself a “spoiler” meant to draw votes from Kotek.

“The spoiler in this race is Tina — Tina has spoiled the state I love, she spoiled the party that I used to belong to with these outrageously progressive policies that I spoke out against during my time in the legislature,” Johnson said. “I kept telling my colleagues that if you continue to go on this progressive route that is waging war on the rest of Oregon, and there is going to be a price to pay.”