Comics museum could be coming to Portland in 2023 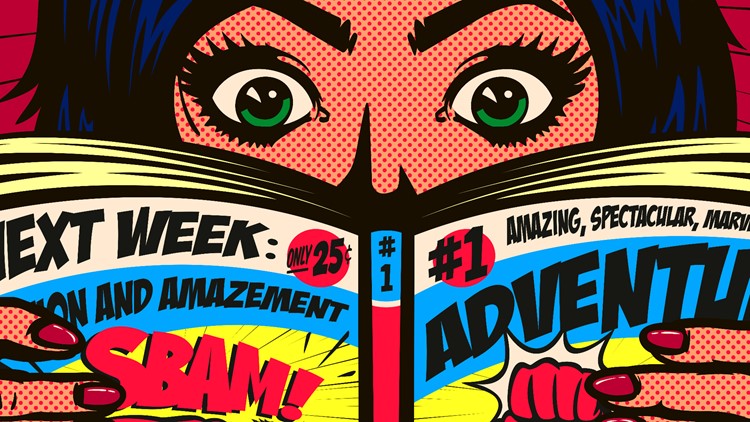 The Northwest Museum of Cartoon Arts is set to host a pop-up exhibit in June but is still looking for a permanent space.

PORTLAND, Ore. — Portland may be getting its very own comics museum in 2023. The Northwest Museum of Cartoon Arts is comprised of a group of artists and creatives throughout the region. The museum has been based out of Portland for years, but it still lacks a physical space.

In June 2023, NW MOCA will be hosting its first ever pop-up exhibits, which will run through the end of September — and supporters hope this is the segue into a permanent location.

Although a location has not been finalized, the 21-person board of directors are sold on settling in the Rose City. The creative panel includes members of the Portland comic community like Katie Pryde, who owns Books With Pictures on SE Division, and Andy Johnson who owns Cosmic Monkey over on NE Sandy Boulevard, just to name a few.

They are hoping to secure a space in Portland’s downtown shopping district due to the high foot traffic and proximity to public transit. There is no guarantee that whatever site becomes the pop-up will become the permanent space, so the museum may take on various forms over the next few years.

Modeling their vision off of museums like San Francisco’s Cartoon Art Museum, NW MOCA is starting small with pop-ups, with the hope of moving into a large commercial space. In addition to the museum, they also aim to provide a number of different opportunities. These vary from offering classes on creating comics, comic history here in the Pacific Northwest and hosting Portland State University students for an artist residency program.

RELATED: Will Vinton, a Portland creative visionary, dies at age 70

The June pop-up event will feature two different exhibits. The first, “Multiculturalism In Comics,” will tackle topics of diversity, race, and representation in the comic book world. The second, “History of Pacific Northwest Comics” will highlight the regions significance in the modern visual arts landscape.

Oregon is an important part of that history, with the state’s first comic book store, Excalibur Comics opening its doors in 1982. It is also home to Will Vinton Studios which was established in 1975. The studio went on to create Michael Jackson’s 1988 film “Moonwalker” as well as the iconic “California Raisin Show.”

More recently the state has played host to Dark Horse Comics, which is based out of Milwaukie. One of the nation’s biggest comic book companies to date, Dark Horse is responsible for iconic adaptations of some of Hollywood’s biggest films like “Star Wars” and “Aliens.” It remains one of the most profitable comic book companies in the United States.

However, fans of Northwest comics are going to have to be patient. It will likely be 2025 before the museum is able to open its doors on a regular basis — but by that time the space will host a variety of works spanning what we define as traditional comic art. In addition to classic Sunday strips, the museum will have handmade zines, graphic novels, digital animation, web comics, and manga, among many other offerings.

NW MOCA is planning on greenlighting their crowd funding campaign in the spring of 2023 once a space for the pop-up has been selected. They then plan on holding the event sometime in June. Their focus will then pivot to offering some youth educational programming during the summer months, before moving into a permanent location in the winter of 2024.

If all goes to plan, doors will open on a regular basis in 2025. A full timeline of the project is available here, on NW MOCA’s website.