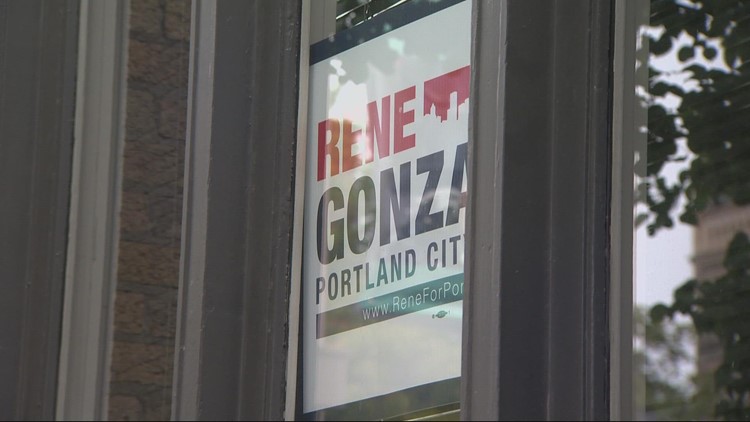 The city accused the Gonzalez campaign of getting heavily discounted rent at its downtown office. Gonzalez argued the rent was fair given Portland’s current market.

PORTLAND, Ore. — The City of Portland has denied a request from city council candidate Rene Gonzalez for reconsideration of a $77,140 fine leveled against his campaign last week. Gonzalez is running against incumbent commissioner Jo Ann Hardesty in the November election.

Candidates who opt to participate in the Small Donor Elections program agree to abide by contribution limits in exchange for receiving a 9:1 match on the first $20 donated from Portland residents, with the intent of enabling candidates to run for office solely on small donations.

The program office said the Gonzalez campaign had been paying $250 per month for the office space since May, and that its value had been advertised at $26 per square foot, equivalent to $6,900 per month.

The $6,650 difference constituted an illegal in-kind campaign contribution under the terms of the Small Donor Elections program, director Susan Mottet wrote when announcing the fine.

Gonzalez was ordered to pay $33,250 for accepting the space and $10,640 for failing to report it, plus another $33,250 back to Schnitzer Properties Management.

The Gonzalez campaign pushed back, first in a statement arguing that the rent amount was of fair market value given the “dismal state of downtown,” and subsequently by formally asking officials on Tuesday to waive the fine.

Jordan Schnitzer also weighed in last week, telling KGW that he met with Gonzalez in April and offered him the space, which had been vacant for two years.

RELATED: ‘He did us a favor’: Schnitzer says the Rene Gonzalez campaign fine is a product of downtown Portland vacancies

He said Gonzalez “did us a favor” by taking the space at a time when leasing activity in downtown Portland is way down, and said he “would’ve done that deal with any nonprofit or political candidate that had views that I thought were important and constructive to our city.”

In a response letter released Thursday, Mottet wrote that her office had concluded the fine was justified.

Replying to the campaign’s arguments about the depressed downtown office market, she wrote that her office had researched the downtown market and concluded that comparable office spaces are listed for similar amounts to the $26-per-square-foot rate that had been advertised for the campaign office.

Her office did find some listed discounts on other spaces, she wrote, but they were less generous and typically contingent on signing one-year leases, rather than month-to-month as the Gonzalez campaign had done.

She said the fact that the office sat vacant for two years while being advertised at $6,900 was in fact proof that the owner was “unwilling to lease the space to the general public for less than the advertised rent, let alone the 96.37% discount the campaign is receiving.”

She also addressed Schnitzer’s public comments, writing that because the space was not advertised to the general public at the lower rate, the discount would be considered a contribution to any specific political campaign or non-profit to which Schnitzer offered it.

“The fair market value is not determined by the willingness of the property owner to make a gift of some or all of the value of the space to another person or entity,” she wrote.

The campaign’s request was technically for reconsideration rather than an appeal, which means the campaign still has the option to separately appeal the fine. The deadline to do so is Oct. 6, Mottet wrote.