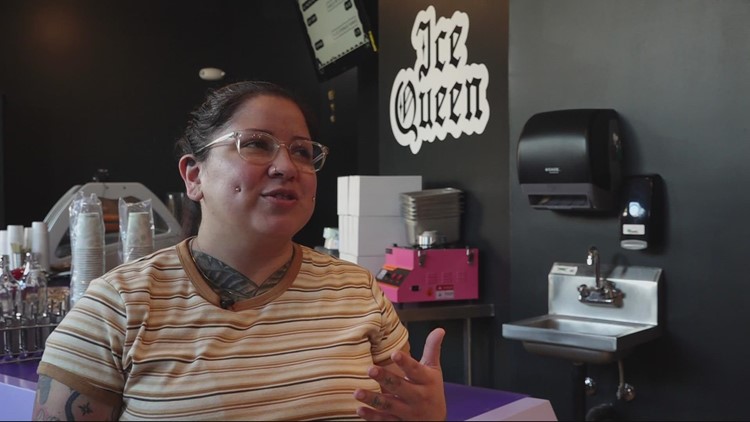 Owner Rebecca Smith says it has been years of pursuing the dream of having her own location since she launched in 2018. She is now finally opening her first store.

But, you don’t have to be vegan to enjoy their ice cream popsicles known as paletas in Spanish.

It’s been years of pursuing the dream of Ice Queen owner, Rebecca Smith, to have her own location since she launched in 2018. She is now finally opening her first storefront on Southeast 11th and Harrison Street, near Ladd’s Addition.

“I used to deliver [my paletas] to peoples houses,” said Smith. “I used to pop up in peoples parking lots and anywhere that would let me. And then I grew to market, then wholesale — which we still do.”

Ice Queen paletas can also be found in over 45 local markets across Portland.

Smith’s love for paletas — a Mexican frozen treat typically made from fresh fruits or rich creamy ingredients — stems straight from her childhood. Ice Queen uses a variety of oat, soy, coconut and almond milks for the ice cream versions, and lots of fresh fruit in the others.

But having transitioned to a plant based diet — she wanted to reinvent the experience for others just like her, who may have never had a paleta before.

“Not everyone knows what chamoy is and not everyone has had rum raisin and so I think I want you to experience those flavors  through my lens,” said Smith.

Having grown up in California she says paletas and the Hispanic culture are incredibly rich. And she wanted to bring a little piece of home to Portland after 13 years of living here.

“I really miss that culture and that environment,” said Smith. “And so it was really important to me to bring a place like that to inner Portland.”

And while the start of her new journey just begun — Smith is excited for what’s next.

“It took a really long time to get here,” said Smith. “I’ve been doing this since 2018 and we’ve done baby steps so to finally have the store was always the goal and to be here just doesn’t even feel real.”

Smith said her father was one of her strongest supporters throughout this new chapter in helping her cultivate the Ice Queen brand.