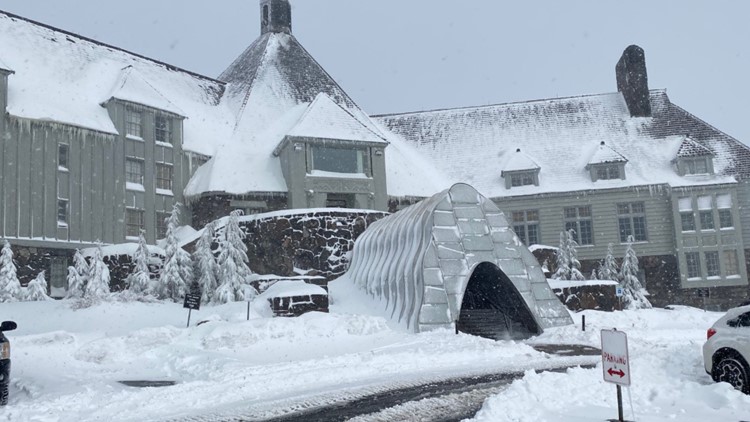 In the past 24 hours, Timberline Lodge reported seeing nearly a foot of snow. This snowfall is a sign of an early winter season.

GOVERNMENT CAMP, Ore. — Just a couple of weeks ago, meteorologists were talking about record-breaking temperatures— now, it’s looking more like winter in the Cascades.

In the last 24 hours, Timberline Lodge has seen nearly a foot of snow.

The heavy snow driving through Government Camp and on the way to Timberline Lodge caught some drivers by surprise, but it’s also a welcome sight for many.

“Since Saturday, we have seen 20 inches on the ground and total of 26 inches of snowfall since Saturday and there’s more in the forecast,” said John Burton with Timberline Lodge.

Snow fell through much of the day on Wednesday outside the ski resort.

Some of the resorts have already decided to get their lifts up and running around Thanksgiving. Mount Hood Meadows and Mount Bachelor are planning on opening Nov. 25. Timberline Lodge hasn’t mention when they plan on opening for this season.

“Our average opening is November 16. We did have a La Niña forecast this year which is generally cold and wet, but the warm weather all through October was a curveball,” Burton said..

There was one lucky snowboarder who got an early taste of the season first heavy snowfall. Steve Della works with the lodge setting up shoots for photographers.

She said there are spots in the higher elevations that are 6 feet deep in snow—so thick, she needed a ride up the mountain in a snow cat just to get to the top.

“We were about three-fourths up the mountain, so I would say about 7,000 feet up, and there’s some spots that are up to your shoulders if not higher,” she said.