Candidates for Oregon governor meet Wednesday for debate on KGW 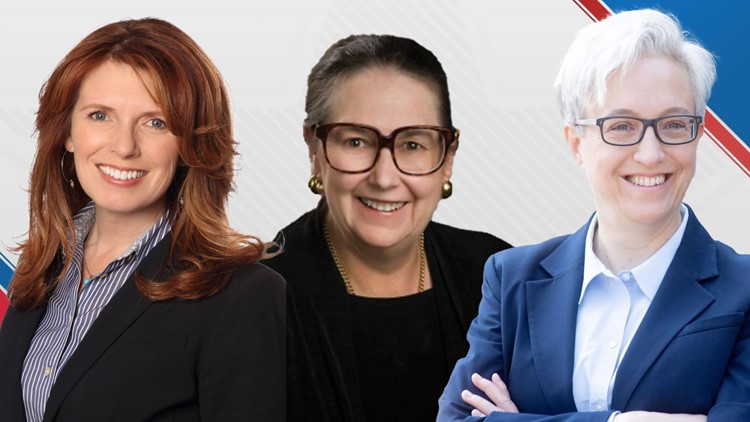 This will be the last televised debate between Republican Christine Drazan, unaffiliated candidate Betsy Johnson and Democrat Tina Kotek.

PORTLAND, Ore. — The three candidates running to be Oregon’s next governor meet Wednesday night for a televised debate hosted by KGW and The Oregonian. This is the fourth and final televised debate featuring Republican Christine Drazan, unaffiliated candidate Betsy Johnson and Democrat Tina Kotek — and it’s set to happen as ballots are in the mail, bound for Oregon voters.

Like most statewide offices, for decades Oregon’s governorship has been a lock for Democrats. But former Democratic state senator Betsy Johnson’s well-funded centrist bid has changed the race into a true toss-up. While the latest polling put Johnson at the rear of a three-way race, Drazan had a slight lead over Kotek — albeit a lead hovering around the margin of error.

The debate will be moderated by Laurel Porter, KGW evening anchor and host of the “Straight Talk” public affairs show, and Hillary Borrud, state government and politics reporter at The Oregonian. Porter’s evening co-anchor, David Molko, will host the broadcast.

The debate airs live on KGW at 7 p.m. Wednesday, Oct. 19, and will be streaming in this article below, on kgw.com and the KGW+ app.

We took your suggestions for the kinds of questions that the candidates should answer. Here’s a preview of some of the topics you can expect to see covered:

Each of these candidates have answered questions about how they would deal with homelessness in Oregon multiple times prior to Wednesday night’s debate, but this particular discussion comes at an interesting time. Portland Mayor Ted Wheeler is reportedly preparing to release a new plan for addressing the issue — one that could include a blanket ban on unsanctioned camping and the creation of several large “campuses” for homeless people. While the candidates have released some initial (and seemingly favorable) responses to the plan, which would be a dramatic step for Portland, they’ll be asked for more detail about their thoughts on the plan and how the response to homelessness should play out elsewhere in the state.

Inextricably linked with the issue of homelessness is mental illness and addiction, compounded by a lack of adequate access to services in Oregon. Each candidate will be asked what they would do to improve access to those services and how they might incentivize more people to work in the relevant fields of treatment.

Oregon voters took an unprecedented step in November of 2020 by passing Measure 110, which decriminalized small amounts of hard drugs in favor of referrals to treatment, along with improved funding for addiction treatment programs. These three candidates for governor might disagree on their appraisal of Measure 110, but they have all criticized the state’s performance in applying it thus far. They’ll be asked what should change about Oregon’s approach to drug treatment.

Portland has seen a dramatic spike in gun violence over the last three years, which a recent report demonstrated. At the same time, law enforcement agencies — particularly the Portland Police Bureau — have struggled to hire and maintain staffing. All three candidates will be asked if they think there need to be more officers on the streets and what they might do to fill vacancies.

Oregon’s public defender system is the last in the nation to rely entirely on contractors — and a chronic shortage of defenders has resulted in a backup of cases, sometimes resulting in cases being dismissed without prosecution. The candidates will be asked what Oregon should do about this system in order to solve the problem of under-representation.

The pandemic played havoc on Oregon schools, leaving many kids behind who struggled with remote learning and resulting in a shortage of staff to help them get back on track. The candidates will be asked what they would do to support teachers who are overburdened and help students still working to catch up academically.

The 2020 racial justice protests highlighted Oregon’s legacy of racism, including the exclusion laws that prohibited Black people from settling in the state. Some Oregonians still display the Confederate flag, now widely panned as a symbol of hate. The candidates will be asked what they would do to help Oregonians of color feel welcome and supported in their state.

With the U.S. Supreme Court’s overturning of Roe v. Wade, abortion has surged to the forefront again as a wedge issue in the November election. Oregon has laws on the books that strongly uphold the right to an abortion, but government leadership will still determine the state’s disposition on many issues related to abortion. Each of the candidates will be asked if they support spending taxpayer funds on helping people from outside of the state access abortions in Oregon, and under what circumstances.