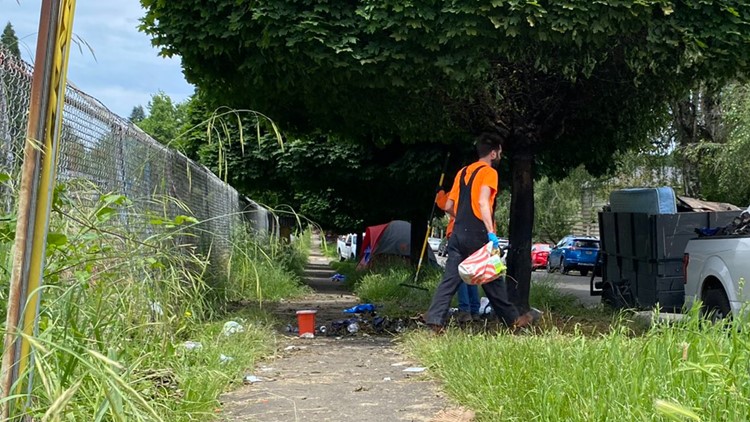 Mayor Wheeler is asking the county for help in banning unsanctioned homeless camping over 18 months.

PORTLAND, Ore. — Mayor Ted Wheeler is expected to announce a plan this week to ban unsanctioned camping in Portland. According to early reports, he wants to build three large homeless campuses instead. It’s an idea that’s been around before but never been done here in Portland.

Wheeler calls the crisis on Portland streets a “vortex of misery.” He’s now calling on the county for help in banning homeless camping over an 18-month period. He is expected to release a plan this week on banning unsanctioned homeless camping and building three 500-person homeless campuses instead.

In a letter obtained by KGW to the Multnomah County Commissioner, he asks for help responding to this crisis. He says there are 700 homeless camps across the city, which is making it nearly impossible for city outreach crews to keep up. He says some waitlists for affordable housing are up to 9 years long, not to mention the drug use that’s compounding the problem.

RELATED: Mayor Wheeler to propose camping ban across Portland and build mega-camps as an alternative

In the letter, Mayor Wheeler lays out this list of requests to the county:

Meanwhile, Wheeler says the city will do the following:

All three candidates for Oregon governor were briefed on the plan last week. Despite their major differences on the topic of homelessness, they all indicated that it could be a solution long overdue.

“I think it’s a good idea. They need to be able to make it happen,” said Democratic candidate Tina Kotek.

“We’re finally getting to where we should have been a long time ago and I’d like to believe that it’s been my presence in this election cycle that has perhaps helped motivate the mayor,” said Betsy Johnson, running unaffiliated.

“I spoke with Mayor Wheeler on Wednesday regarding his new plan to address homelessness in Portland. Location, security, and management of the new initiative are unknown at this time which leaves some major issues unanswered. But I am encouraged to see the city taking action. I look forward to working with Mayor Wheeler and local leaders as our state’s next governor to ensure homelessness is rare and temporary, reopen our sidewalks and public spaces, restore safety to our streets, and support Oregonians in need.”

Though they supported the outline of Wheeler’s plan, all three candidates have many questions on what the ban will look like.

“What’s the level of services that are going to be provided for women or families? Trying to understand how they’re going to protect and help people feel secure,” said Kotek.

“He’s got a long way to go before it can be implemented, starting to try to harmonize the county and city’s approach to this problem,” said Johnson.

KGW sat down with each candidate to hear their plans to address this crisis. The full segment can be seen on the KGW+ app or individually on YouTube.