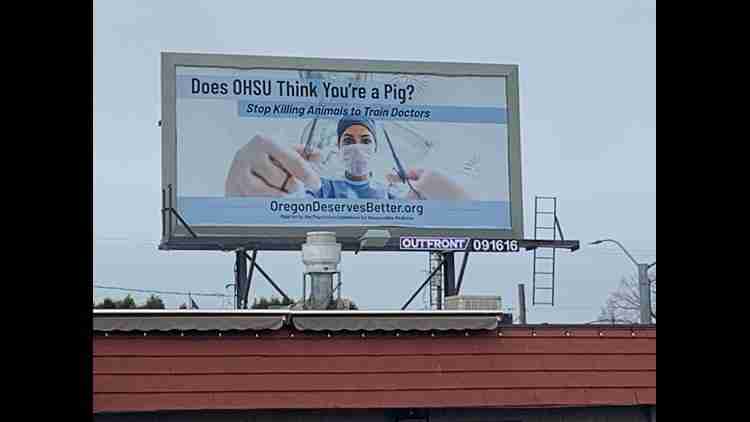 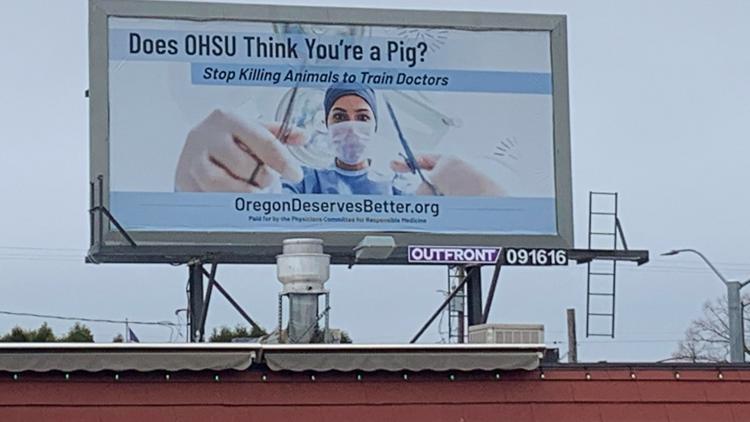 A national physicians group against using live animals in medical schools is speaking out about Oregon Health and Sciences University’s use of pigs to teach surgery.

PORTLAND, Ore. — A national physicians group that works to end the use of animals in medical education settings is speaking out about Oregon Health and Sciences University’s use of pigs to teach surgery.

The Physicians Committee for Responsible Medicine says it’s an outdated teaching method that most U.S. surgery programs no longer use. So they’ve filed a complaint and want Portlanders to know about it.

A billboard on Southeast Powell Boulevard is one of three going up in Portland. It says “Does OHSU think you’re a pig?” and “stop killing animals to train doctors.”

“The use of live animals to train surgery trainees and faculty is archaic,” said John Pippin, M.D.

Pippin is the director of academic affairs for the non-profit organization which has 17,000 doctor members.

They say OHSU’s residents are instructed to cut into live pigs and perform invasive procedures, when more modern training techniques make it unnecessary.

“The dominant alternative method these days is simulation that has been designed specifically to replace animal use by replicating human anatomy and physiology,” said Pippen.

In a statement OHSU said the university only uses animals in surgical training “…when nonanimal methods are inadequate or too dangerous for human participants.”

The University statement went on to say, “We look forward to a time when surgical training methods are capable of faithfully modeling the complexity of a living system; however, technology currently does not exist to recreate some of the most complex procedures surgeons must regularly perform in humans, such as stopping internal bleeding. OHSU continually monitors and evaluates alternatives to using animal models in our surgical training and is committed to adopting these techniques as soon as their effectiveness is demonstrated.”

The physicians group disagrees with OHSU and over the years has been launching this same type of campaign, using billboards and complaints filed with the USDA, to stop universities from doing this.

Dr. Pippen said more than 200, or more than 3/4 of U.S. surgery teaching programs surveyed don’t use live animals for training anymore and OHSU is the remaining school in both Oregon and Washington to do so.

“So for them to say this is the best method for training is self-serving, behind the times and false,” said Pippen.

Pippen noted that USDA inspections showed Animal Welfare Act violations at OHSU every year from 2014-2022 for a total of 31 and that 20 animal deaths were directly attributable to veterinary or staff violations of the AWA.

The OHSU statement countered that, “OHSU understands and fully embraces the responsibility to provide compassionate, quality care that comes with the privilege of working with animal models.”