Arrest made in double murder unsolved for half century 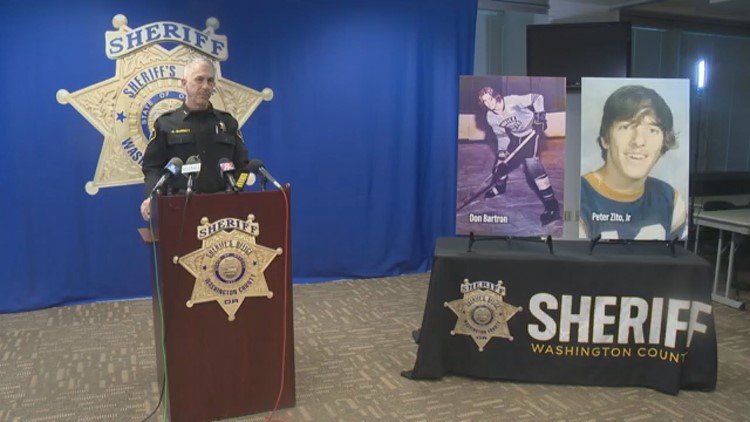 The Washington County Sheriff says a nearly 50-year-old double murder case has been solved, bringing the start of closure to the families of the victims.

HILLSBORO, Ore. — The Washington County Sheriff says a nearly 50-year-old double murder case has been solved, finally bringing some closure to the families of the victims.

This week, deputies arrested an Aloha man in connection with the cold case murders. Like his alleged victims, the suspect was a teenager at the time of the murders.

65-year-old Steven Criss is now in the Washington County jail, indicted by a grand jury this week on two counts of second-degree murder.

RELATED: The story of the first man legally hanged in Clark County

Peter Zito’s sister Barbara Zito said she is grateful for an arrest that was long overdue.

“It’s a difficult thing to deal with, to have to accept that your brother can be murdered this way and there is nobody accountable for it,” said Zito.

Criss was suspected in the murders early on, the sheriff’s office said, but ballistics testing of a .22 caliber handgun he had back then didn’t provide a match.

Criss went on to join the U.S. Army, and in 1976 used that same handgun to murder his commanding officer at Fort Lewis, Wash., shooting the victim in the head multiple times.

Criss served only 12 years of a 35-year military sentence before being released, eventually ending up back in Washington County.

RELATED: How Portland’s crime rates compares to other major US cities

The double murder case in Oregon got new life this year, when detective Mark Povolny and others on the Major Crimes Team took another look.

“While reviewing the case file, we decided to take a second look at the ballistic testing, since it had been done nearly 50 years ago,” said Pavolny.

Modern testing by the federal Bureau of Alcohol, Tobacco, Firearms and Explosives paid off. Thenthe Oregon State Police crime lab confirmed: the gun used in the Fort Lewis murder was the same one used to kill the two local teenagers in 1974.

“To date, this is the oldest known match nationwide that the ATF has ever confirmed for a prosecutable case,” noted Pavolny.

“I want to acknowledge the loss of your loved ones many years ago and what you’ve had to endure waiting for today,” said Garrett.

And now that the day has come, Pete Zito’s sister can’t help but look back.

“He was just a happy kid, and it was terrible when I heard he was gone.”

Despite the arrest, this investigation is is ongoing. Detectives are also looking into the possibility that Criss was responsible for additional homicides. Anyone with information about Criss and his activities since 1988 can call the Washington County Sheriff’s Office at 503-846-2700. Anonymous tips can be providedthrough Crime Stoppers of Oregon.