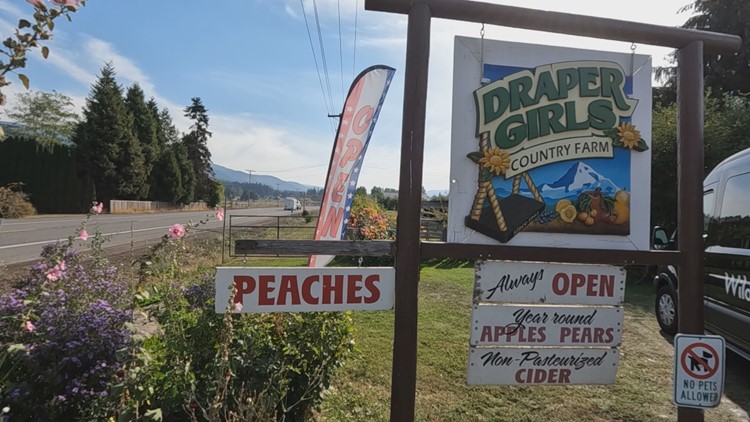 Apple picking season is coming to a close, but there’s still a few weeks left. We went out to check out the ‘u-pick’ situation at Draper Girls Country Farm.

HOOD RIVER COUNTY, Ore. — In this week’s Let’s Get Out There, we head to Draper Girls Country Farm in Hood River County to survey the ‘u-pick’ situation as the season nears its close.

Highway 35, also known as Hood River County’s Fruit Loop might be the road less traveled, but that doesn’t mean it’s not well traveled.

At Draper Girls Country Farm, the apple doesn’t fall far from the tree.

“Since 1962, it was my parents’ farm,” said Theresa Draper, the farm’s owner carrying on her family legacy.

“They moved here from California, bought the farm sight unseen, and I just could never let it go. I just had to stay here,” she said.

40 acres of land, which includes a 9 acre orchard with apples and pears.

“This year is a kind of shortage on both,” said Draper. “But we’re just going to go with the flow and when we run out, we run out.”

RELATED: Soar through the treetops at Pumpkin Ridge Zip Tour

It’s how Draper keeps the business going, especially after an unpredictable spring. Snow well into April affected this year’s crop. The same abundance of apples may not be there, but the customers are, like the Gray family from Portland.

“I think just family time, anytime you can be outdoors and just enjoy the Northwest is a great day,” said Anna Gray.

Draper said if you pick apples or pears fresh, they’ll last for two months in your fridge, if not longer. Perfect for Thanksgiving, or even Christmas recipes.

If “u-pick” isn’t your thing, there’s fresh produce at their store and plenty to choose from on the fruit loop, no matter where you stop, whether it’s an orchard or vineyard.

“I feel like everybody has something different to offer, so that’s what’s so cool about it,” said Draper. “I kind of recommend picking up a fruit loop map and going through each individual spot on the fruit loop and deciding what you want to visit so because there’s something for everybody.”

Draper suggests there’s only a few more weeks in apple season so make your plans soon before it comes to a close.

Let’s Get Out there airs once a week on KGW’s 4 p.m. newscast and The Good Stuff, which airs Monday-Thursday at 7 p.m. We’re including viewer photos for this series. You can text your photos to 503-226-5088 or post them on the KGW Facebook page.