Air quality worsens in Willamette Valley due to wildfire smoke 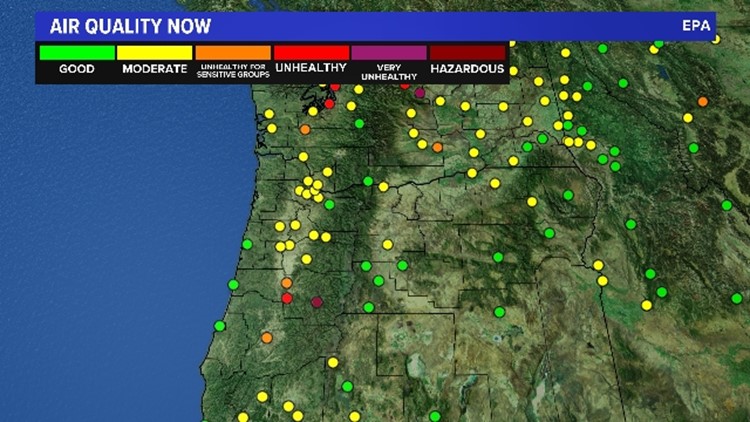 The diminished air quality is mainly due to the Cedar Creek Fire, which has burned more than 120,000 acres in the Willamette and Deschutes National Forests.

PORTLAND, Ore. — Wildfire smoke drove down air quality throughout the Willamette Valley on Sunday, including the Portland metro area.

Much of the valley had “moderate” air quality as of Sunday afternoon, including Portland, Beaverton and Clackamas,  according to AirNow.gov, in addition to several towns in eastern Oregon.

Further south, in the Eugene and Roseburg area, the air quality dropped town to “unhealthy for sensitive groups,” and other parts of Lane County were in the “unhealthy” or “hazardous” category.

The diminished air quality is mainly due to the Cedar Creek Fire burning in the Willamette and Deschutes National Forests east of Eugene. The fire has spread to more than 120,000 acres since it started on Aug. 1. It’s 38% contained as of Sunday.

Smoke and haze is also coming from wildfires that are burning in eastern Washington.

RELATED: This DIY air filter for wildfire smoke is less than $20